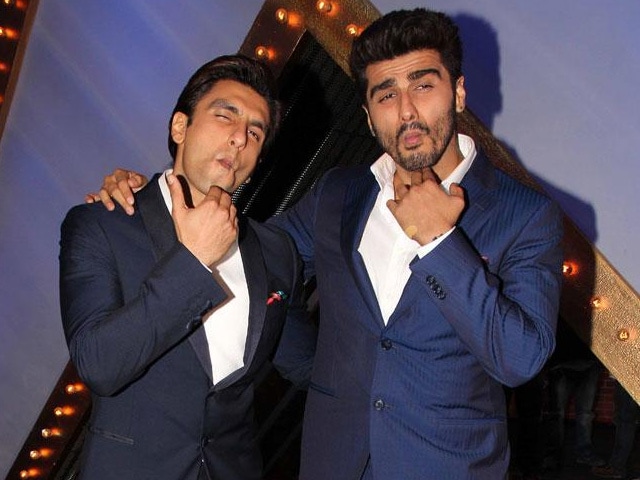 New Delhi: Arjun Kapoor and Shraddha Kapoor are busy promoting their film Half Girlfriend. The 31-year-old actor recently shared a hilarious video on social media introducing his real life 'half girlfriend.' In the video, Arjun Kapoor is seen introducing his 'someone special.' "Co-star Se zyada... Lover Se Thoda Kam," he says. As the camera pans towards the left you can see Shraddha Kapoor. However, the 2 States actor interrupts and asks the cameraman to pan more towards left. Yes, it is none other than his Gunday co-star and close friend Ranveer Singh. At the end of the video, you can see the duo hugging each other and asking Shraddha Kapoor to move over. The Lootera actor is well known for wholeheartedly supporting other artists and this video shared by Arjun Kapoor is proof.

Last month, a few days after the trailer of Half Girlfriend was unveiled by the makers of the film, Ranveer Singh tweeted to Arjun Kapoor that he is ready to be his 'other half' or the 'better half.' To which the Finding Fanny actor replied, "You are and will always be my full and final !!!"

Half Girlfriend, directed by Mohit Suri, is based on Chetan Bhagat's novel of the same name. In the film, Arjun Kapoor will feature as Madhav Jha, a man who hails from Bihar. Shraddha Kapoor will portray the role of a Delhi-based student, Riya Somani.

After Ek Villain and Aashiqui 2, Half Girlfriend is Mohit Suri and Shraddha Kapoor's third film together.

Promoted
Listen to the latest songs, only on JioSaavn.com
Arjun Kapoor will next feature in Mubarakan, directed by Anees Bazmee. The film, which also stars Anil Kapoor, Ileana D'Cruz and Athiya Shetty, is slated to release on July 28.