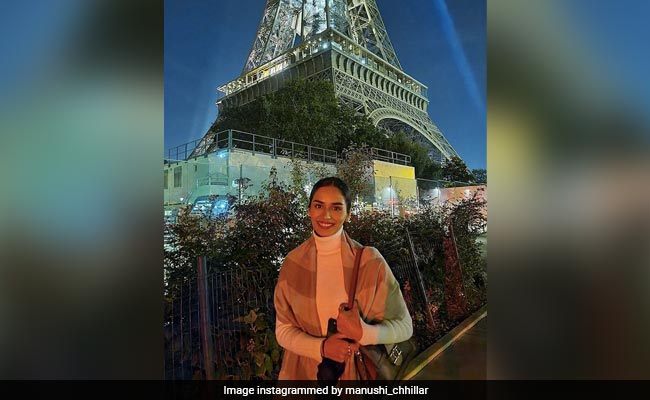 In Paris, a tinge of love is always in the air. And, beauty queen Manushi Chhillar can attest to this. In a series of pictures that she shared on Instagram, Manushi Chhillar has revealed what she has been up to in the “city of love”. Her caption suggests that her time in Paris could be straight out of the pages of a romance novel. Manushi wrote, “Midnight walk, endless talk, uninhibited laughter, love and Paris.” She also added the hashtag “photo dump” to the post. Her pictures second her words as she posed for stunning images with the Eiffel Tower in the background.

That's not all. In another image, Manushi Chhillar shared a glimpse of a lock that had a silhouette of the Eiffel Tower, a heart and the word "Paris" engraved on it. Fans of the former Miss World were generous with the use of heart emoji in the comment section and showered her with compliments.

Manushi Chhillar made sure to give her fans a peek into her time in Paris as she strutted the streets of the city like the queen that she is. She also wore a sweatshirt that said “90's supermodel.” In the caption, she reiterated this and said, “90s supermodel lover since infinity.”

In another set of images, we also saw Manushi Chhillar in front of a quaint cafe in Paris. Dressed in denim pants and a jacket, she wrote, “Enjoying the outdoors before it gets cold.”

And when she landed in the “city of love” three weeks ago, she was more than happy to be there. She shared this in a post and in a caption written in French. Manushi Chhillar wrote, “ Tu me manques (I missed you)."

It is no secret that Manushi Chhillar loves to travel. Her Instagram timeline is filled with images and videos of her quick getaways. We recently saw a picture of herself enjoy some “me time” on the beach. Sharing the images, she wrote, “Silent sunsets and warm waters.”

Manushi Chhillar rose to fame when she was crowned Miss World in China's Sanya city in November 2017. Soon after, she founded the non-profit organization Project Shakti, which aims to improve the menstrual hygiene of women in rural India. The trained Kuchipudi dancer will make her Bollywood debut with Prithviraj, alongside Akshay Kumar.