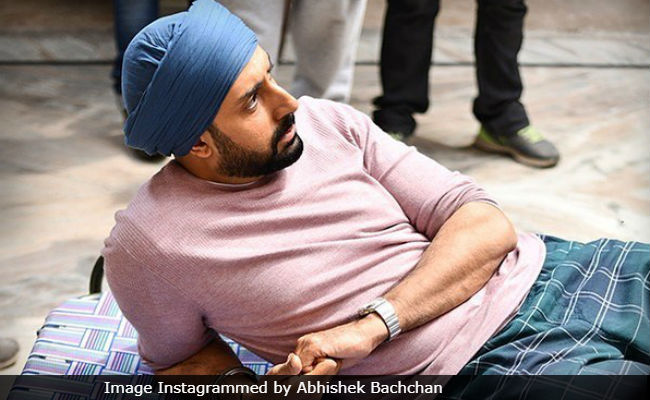 Abhishek Bachchan on the sets of Manmarziyaan. (Image courtesy: bachchan )

Abhishek Bachchan, who is all set to return to the silver screen after two years, with Anurag Kashyap's Manmarziyaan, recently interacted with the media and said that he took a break for two years in order to "re-evaluate his life" and also to "change the complacency" in his work, reports news agency PTI. Abhishek, who was last seen in the 2016 comedy film Housefull 3, told PTI: "I just wanted to re-evaluate where I was in life, wanted to re-energise myself. There was a definite complacency that had come into my work and I wanted to change that." The 42-year-old actor added, "It is not just about this industry, life in general, it is about out of sight, out of mind. Initially it was a thought that I had. But I was very confident that it would not become an issue."

Abhishek Bachchan , who has delivered many hit films such as Guru, Happy New Year and the Dhoom series among others added, "I have worked very hard on all the films I have done. I have loved all the films that I have done and I have enjoyed every one of them. (But) I felt my personal approach needed to change."

Meanwhile, Abhishek's Manmarziyaan co-star Taapsee Pannu said that it was "brave" of Abhishek to take a break and then to return with an unconventional film like Manmarziyaan. "Abhishek will sometimes be sure, sometimes unsure of things but you need strength to survive all the ups and downs. Then to take a break to sort things out and return with a film like Manmarziyaan. It is not a conventional heroic film for him to do. It is very brave and he is strong as a person to do that. It requires courage," PTI quoted Taapsee as saying.

Directed by Anurag Kashyap, Manmarziyaan also features Vicky Kaushal and it is slated to release on September 7.