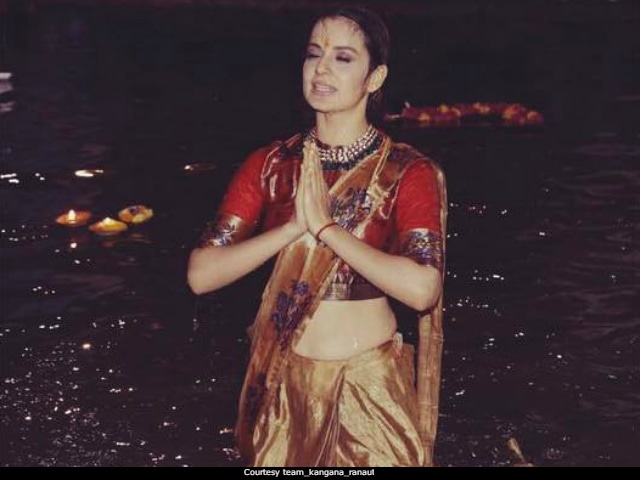 New Delhi: Actress Kangana Ranaut, who will next be playing the role of Rani Laxmibai in historical drama titled Manikarnika, released the poster of the film in Varanasi on Thursday. Kangana arrived in Varanasi's Dashashwamedh Ghat and took a dip in the Ganga ahead of unveiling the poster on Thursday. Later, she also participated in the Ganga aarti at the Dashashwamedh Ghat along with the team of her new film. Kangana revealed that she wanted her journey for Manikarnika to begin with the blessings of Lord Shiva, reported IANS. "After coming on board to this project I'm feeling like I've achieved something very big in this movie," Kangana told IANS. 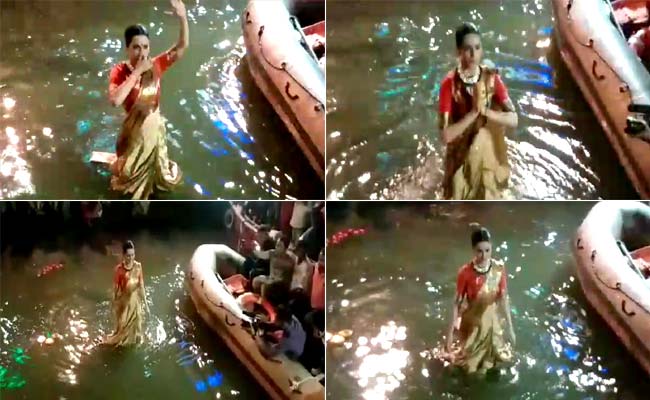 Kangana Ranaut takes dip in the Ganges in Varanasi

Kangana was resplendent in a pale pink Sabyasachi sari and cut-stone jewellery at the poster launch event. More pictures from Kangana Ranaut's visit to Varanasi have been shared on social media.

Some more pictures from today's grand launch of #Manikarnika in Varanasi!

Earlier, the Rangoon actress also paid a visit to the Kashi Vishwanath Temple in Varanasi:

KanganaRanaut snapped after offering her prayers at the Kashi Vishwanath Temple in Varanasi today!!

The 30-year-old actress also shared an update on the progress report of Manikarnika, about which very little is known. "The prep is restricted to the material like photographs and letters. I saw a lot of things here. I will be going to Jhansi and other places for research," Kangana told IANS. K V Vijayendra Prasad, the celebrated screenwriter who has worked for films like Bajrangi Bhaijaan and is currently working on the script of Kangana's film.

Kangna Ranaut unveils the poster of #Manikarnika - The Queen Of Jhansi in Varanasi... Directed by Krish... 27 April 2018 release. pic.twitter.com/0umf83nrB1

Kangana Ranaut was accompanied at the poster launch event by composer trio - Shankar Mahadevan, Ehsaan Noorani and Loy Mendonsa - who will work on the music of the film. The trio delivered a blockbuster performance along with Richa Singh at the event.

Promoted
Listen to the latest songs, only on JioSaavn.com
The biopic of Rani Laxmibai was earlier supposed to be directed by Ketan Mehta but the film will reportedly have a new director now. Kangana Ranaut has trained extensively in horse-riding and sword-fighting for Manikarnika and will undergo physical transformation for playing the protagonist.

Kangana Ranaut was last seen as a feisty actress in war drama Rangoon.