No Points For Guessing Where Malavika Mohanan Is Holidaying 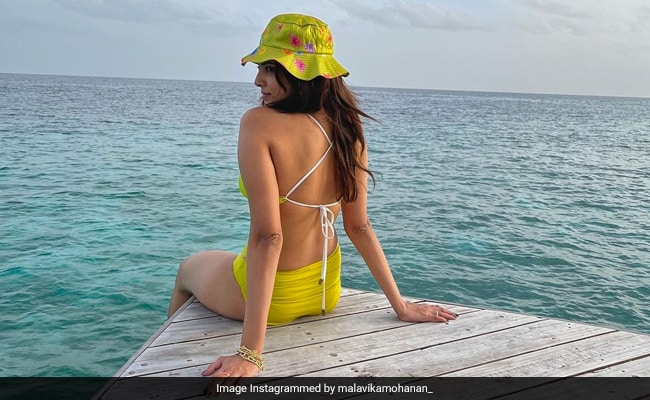 Malavika Mohanan is in the mood for exploration. We aren't saying it. Her latest posts are screaming it out loud. She is currently spending her holidays in the Maldives. After all, what better place is there to escape from the chilly winters? But Malavika's decision was a step in a new direction. Malavika is mostly a "mountain person," she wrote in one of her posts. However, Malavika doesn't mind exploring the beaches too. She has posted two photos in a stringed bikini and beach hat and wrote, "Always been more of a mountain person, but never too late to start exploring maybe?"

The exploration has led Malavika Mohanan to quite a good experience. We know this from her regular social media updates from Maldives. Malavika is definitely loving the sunshine on the island. Malavika posted a video where she steps out in the Sun in a backless top and denim shorts. She stands facing the vast ocean in front of her. She wrote, "Walking on sunshine" and added a white heart emoji also.

Malavika Mohanan also posted a nighttime photo where she is seen in printed beachwear. She wears an airy shirt over her beachwear and looks away from the camera, showing us a blurred night sky behind her. We also see blurry lights in the background. The actress is loving her stay in Maldives and her caption is proof. Malavika wrote, "My sky is blue-r than yours." Once again, a white heart icon found its place in the caption.

Malavika Mohanan's latest Instagram post shows her enjoying quality time at the pool. The actress is in her swimsuit and she is lazily floating in the pool. The blue ocean and the clear skies add to the charm of the photo. The caption read, "Float."

Beaches and mountains aren't the only places where Malavika Mohanan loves to travel. She was recently seen on a jungle safari in Ranthambore National Park after she attended Katrina Kaif and Vicky Kaushal's wedding in Jaipur. She shared photos from her trip and captioned them, "When in Ranthambore." Take a look at her post:

Among other works, Malavika Mohanan starred in Majid Majidi's Beyond The Clouds opposite Ishaan Khatter.