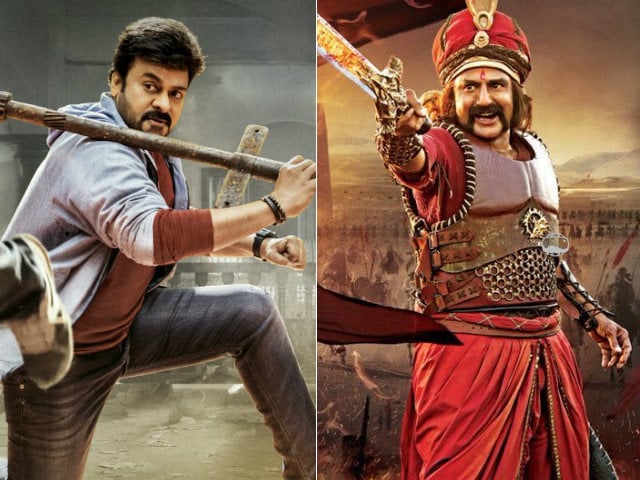 Khaidi No 150 Vs Gautamiputra Satakarni: Posters of the films

New Delhi: This festive weekend is a bonanza at the box office down South, with a clash of titans between Telugu superstars Chiranjeevi and Nandamuri Balakrishna. The actors have a film apiece out - Chiranjeevi's Khaidi No 150 released on Wednesday, Balakrishna's Gautamiputra Satakarni opened on Thursday. For both, the films mark a milestone on their extensive filmographies - Khaidi No 150 is so named because it's film #150 for Chiranjeevi, Balakrishna's Gautamiputra Satakarni marks his 100th movie. For Chiranjeevi, 61, the occasion is even more momentuous - Khaidi No 150 heralds his return to acting after 10 years, in which he made politics his focus. International box office reports for both films have already come in and trade analyst Taran Adarsh, citing box office tracker Rentrak, reports that both movies are speeding ahead in USA.

These figures are for day 2 of Chiranjeevi's Khaidi No 150:

The two films couldn't be more different. Chiranjeevi plays a double role in Khaidi No 150, which is a remake of Vijay's Tamil hit Kaththi. His heroine is Kajal Aggarwal and his son Ram Charan Teja (who produces the film) and nephew Allu Arjun make special appearances. The film has all the ingredients of a Chiranjeevi blockbuster, including thrilling action and peppy dance numbers.

Nandamuri Balakrishna, son of legendary actor-politician N T Rama Rao , made Gautamiputra Satakarni because it was a movie his father wanted to make and couldn't. "One fine day Krish (the director) approached me with Satakarni script. I accepted to do this film after listening to the first ten minutes of the script. It is a divine intervention, that I had an opportunity to do a historic role," he told news agency PTI. The historical stars Balakrishna, 56, as the titular 2nd century AD ruler of the Satavahana dynasty and the cast includes Shriya Saran, Hema Malini and Kabir Bedi.

Promoted
Listen to the latest songs, only on JioSaavn.com
The three-day festive weekend of Makar Sankranti, Lohri and Pongal began today. Other films cashing in are Bollywood offerings OK Jaanu and Haraamkhor, and Deepika Padukone's Hollywood debutxXx: The Return Of Xander Cage.