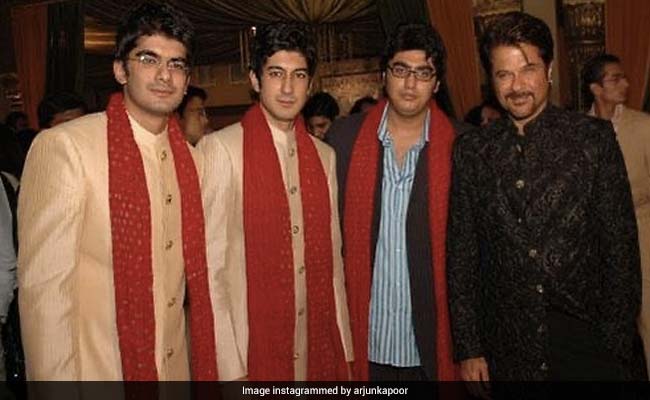 Having a dull day? Don't worry. Majnu Bhai Anil Kapoor and his three musketeers - Arjun Kapoor, Mohit Marwah and Akshay Marwah - are here for you. The Panipat actor made our Tuesday better by sharing a priceless throwback picture, which features his uncle Anil Kapoor and cousins Akshay and Mohit Marwah. The photo stole the spotlight on the Internet, courtesy a glimpse of Anil Kapoor, Arjun, Mohit and Akshay's "fashion ka jalwa." In the photo, Anil Kapoor can be seen dressed in a black sherwani while Arjun Kapoor can be seen sporting a blue shirt and a black suit. Akshay and Mohit, on the other hand, can be seen twinning in gold sherwanis. Going by the post, the photograph appears to be from when Arjun Kapoor was overweight.

Sharing the picture, Arjun Kapoor hilariously referred to Anil Kapoor's character Majnu Bhai from the 2007 film Welcome and wrote: "Majnu Bhai and his three musketeers!" For those who don't know, Majnu Bhai is a popular character played by Anil Kapoor in the Anees Bazmee-directed film.

Arjun Kapoor's throwback game has always been on point and his social media posts prove it. In one of his previous posts, the actor shared a really old photo of his parents Boney Kapoor and Mona Shourie, which he accompanied with an emotional note. He posted the picture on Children's Day. "I must thank my parents for allowing me to have this amazing life growing up as a child... Despite all their ups and downs, I was always treated with love respect and care," an excerpt from his post read.

So it's children's day today & I thought I must thank my parents for allowing me to have this amazing life growing up as a child...despite all their ups & downs I was always treated with love respect & care...they let me become my own person & be what I am today... also belated Happy birthday Dad. May ur love for matching tracksuits long continue... Love you... have an amazing year and stay the way you are...miss your smile Mom nowadays more than ever...hope u happy wherever you are...

Meanwhile, take a look at some of the other throwback pictures shared by Arjun Kapoor:

Brothers In Arms !!! So @mohitmarwah & I pose away as usual while @akshaymarwah22 looks around for the next business opportunity even as a kid... #tuesdaythrowback #goodtimes #fashionkahalwa #brothersday

On the work front, Arjun Kapoor was last seen in Panipat along with Kriti Sanon and Sanjay Dutt. He will next be seen in Dibakar Banerjee's Sandeep Aur Pinky Faraar, in which he will share screen space with Parineeti Chopra.