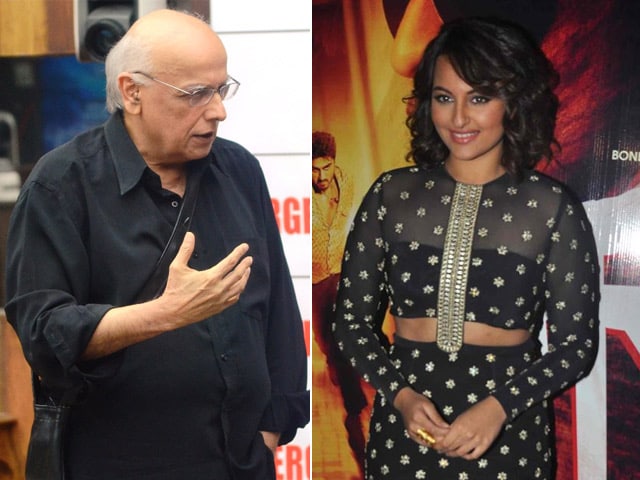 In a Twitter conversation on the sidelines of the turbulence around the FIR against the AIB Roast, actress Sonakshi Sinha responded to director Mahesh Bhatt's question about why she hadn't been named in the FIR when his daughter Alia had. Neither actress participated in the controversial Roast but were in the audience and were spotted laughing at the jokes.

In a series of tweets, Sonakshi reminded Mr Bhatt that a previous FIR against the Roast - filed in Pune, and not in Delhi or Kolkata as her tweet says - mentioned her and not Alia. In return, Mr Bhatt thanked the Tevar actress for her 'sane response' and 'amazing maturity.'

Earlier this month, an FIR was registered in Pune accusing the actors present at the Roast of obscene behavior in a public place. "We have registered an FIR. As per the complaint, it is also against Deepika Padukone and Sonakshi Sinha," DCP Sudhakar Pathare had said.

Dear Mr.@MaheshNBhatt, a couple of pointless FIR's have been filed before this (delhi and kol if im not mistaken, in which my name was (1/4)

Mentioned and Alia's wasnt. I don't remember my father questioning them as to how or why so. I do agree with u however, if these FIR's (2/4)

Are filed on 2-3 members of the audience, why not the other 3,998. Lets not give these ppl the attention they so desperately seek, (3/4)

And as far as my memeory serves me, nobody EVER went to jail for laughing. (4/4)

@sonakshisinha TRUE! I could not agree with you more. Thank you for your SANE response. Amazed by your maturity at this tender age. Love

Mr Bhatt also wrote on Twitter that 'courts are being clogged with silly cases' and described the outcry around the Roast as 'manufactured drama.'

The Roast was filmed in Mumbai last December with a paying audience of 4,000. It was then edited and released in three parts on AIB's YouTube channel. A week later, AIB took the Roast offline after the Maharashtra government said it would investigate the show for alleged obscenity.

The expletive-laced Roast has also been criticized by actor Aamir Khan who said "I felt it was a very violent event. Violence is not only physical, it can be verbal and emotional too. When you insult someone, you perpetuate violence." But he clarified that there must be no witch-hunt against those involved in the Roast if no law had been broken.

Promoted
Listen to the latest songs, only on JioSaavn.com
Yesterday, an open letter from a blogger reminded Aamir Khan that he had defended his films PK and Delhi Belly against accusations of offensiveness.

Many other members of the film fraternity have spoken out in favour of the Roast, including Anushka Sharma who was made the butt of some jokes on the show.