"Every view is a priceless memory," wrote Madhuri Dixit 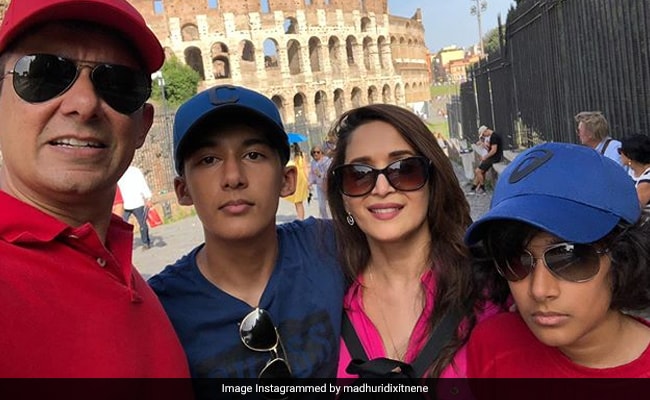 Madhuri Dixit is on a vacation with her family in Rome and she added a few more pictures to her Rome album on Instagram, which you surely would not like miss. On Wednesday, the actress shared pictures featuring her husband Sriram Nene and their two sons - Arin and Raayan. In her post, the actress wrote: "Rome is spectacular. Every view is a priceless memory." In a separate post, she shared a picture of herself in front of the Colosseum and wrote: "I fell in love with this eternal city." All the posts from her Rome vacation are accompanied by a common hashtag, which is "#SummerInRome." Check out the pictures, which Madhuri posted recently:

I fell in love with this eternal city #SummerInRome

Earlier this week, she shared a picture from the vacation, featuring her husband Sriram Nene. She used a face filter on her husband due to which he appeared to be wearing a turban and sharing the photo, she captioned: "With my Maharaja in Italy." She also shared an adorable family portrait last week and wrote: "Made with love. Family moments."

With my Maharaja in Italy. #SummerInRome

Made with love. Family moments #SummerInRome