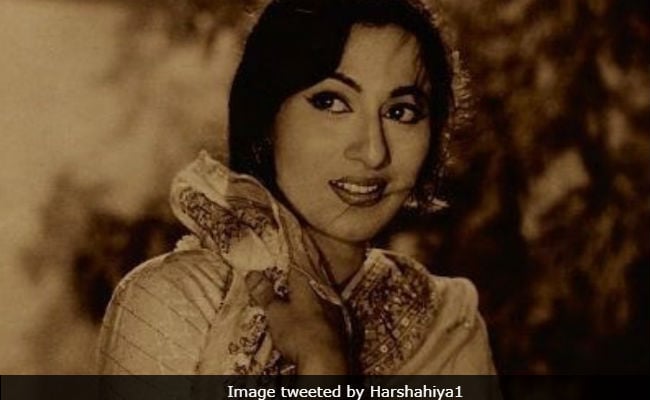 On the 86th birth anniversary of Madhubala, fans flooded Twitter with posts about the Mughal-e-Azam actress on Thursday. In their tweets, fans referred to Madhubala as the "most beautiful actress of Indian cinema" and shared some priceless throwback pictures on social media. On the legendary actress' birth anniversary, which coincides with Valentine's Day, some fans paid tribute by sharing special picture collages, while others posted stills from her classic films. The never-ending list of fans was also delighted to see Google's tribute to the legendary actress, with a special doodle dedicated to her. On Madhubala's birthday, we have handpicked some of our favourite tweets shared by fans:

Take a look at some of the tweets here:

Remembering Madhubala, on her Birthday!
Most Beautiful Actress of Indian Cinema..Everyone's Favourite. pic.twitter.com/THU25bwuW6

Happy Birthday To The Most Beautiful Madhubala ji pic.twitter.com/mLR8xUvA3f

Here are some posts by fans:

Happy Birthday Madhubala: Beyond her arresting beauty, a look at her life's tragedies https://t.co/iD8vhxfeiz#Madhubala
#DilipKumar#Bollywoodpic.twitter.com/Ec7EXgn1MW

Happy birth anniversary to one and only legendary Madhubala.

What a gorgeousness. No one can match this epitome of beauty. #Madhubalapic.twitter.com/wG9NiQr7Cl

The legendary actress, who enthralled the audience with her acting prowess and her expressive eyes, was referred to as the "Venus of Indian cinema" by fans in several tweets.

The Venus of Indian Cinema #Madhubalapic.twitter.com/8SujtretZy

Remembering "The Venus of Indian Cinema" Madhubala ji on her 86th birth anniversary.#Madhubalapic.twitter.com/v9jnojZuRp

"Her unforgettable portrayal of Anarkali in Mughal-e-Azam gave Madhubala the iconic status," tweeted a fan.

On Valentine's Day Remembering gorgeous #Madhubala ji on her 86th Birth Anniversary the most beautiful woman who rule the screen forever
Her unforgettable portrayal of #Anarkali in #MughalEAzam gave Madhubala the iconic status.#Madhubala ji still miss your charm on screen pic.twitter.com/ty9qFaIu0f

Madhubala made her Bollywood debut at the age of 9 with the 1942 film Basant. The Internet knew that.

The Eternal 'Basant' (spring) of Indian cinema !!! Anarkali who still set the screen on fire and melts millions of hearts with that innocent smile - Ms #Madhubala !!! pic.twitter.com/02tqwnqX2v

Fans were also delighted to see Google's tribute to the legendary actress with a special doodle dedicated to her.

A fan shared a picture collage of Madhubala and wrote: "Madhubala ji defines everything you can imagine a woman to reflect from outside and inside."

Madhubala ji defines everything you can imagine a woman to reflect from outside and inside pic.twitter.com/52kQlXsMlU

Madhubala stepped into the Indian film industry at the age of 9 with the 1942 film Basant. However, her breakthrough film was Kamal Amrohi's Mahal, which released in 1949. The actress featured in nearly 70 films including classics such as Mughal-e-Azam, Mr. & Mrs. '55, Chalti Ka Naam Gaadi, Barsaat Ki Raat and Half Ticket among others.

Madhubala died of prolonged lung and heart illness, at the age of 36 on February 23, 1969.