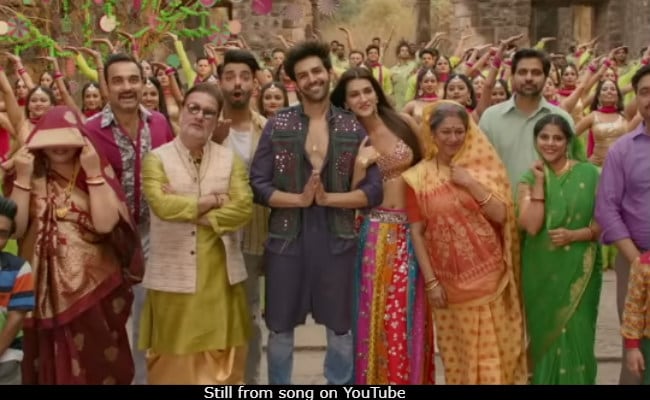 Poster Lagwa Do is the first song from Kriti Sanon and Kartik Aaryan's new film Luka Chuppi to be released! As you can guess from the title of the song, it is actually a redux of Poster Lagwa Do Bazaar Mein from Akshay Kumar's 1997 film Aflatoon, in which he co-starred with Urmila Matondkar. If you have watched the trailer of Luka Chuppi's Poster Lagwa Do, you'll know that the song is an even more hilarious summation of the film's theme - Kriti and Kartik pose as a married couple ahead of their wedding to enjoy the perks of a live-in relationship. In the film, Kartik Aaryan has been cast as a small town journalist while Kriti Sanon features in the role of his love interest.

The song begins with Kriti and Kartik's relatives searching for the two while they dance to the beats of Poster Lagwa Do. Kriti Sanon, who shared the song on Twitter, borrowed the song's lyrics to describe it aptly with this caption: "Ek ladka, ek ladki, dono pagal ho gaye pyaar mein! Aaaaayeeeinn."

Just a day before the song's release, Kriti Sanon and Kartik Aaryan roped in none other than Akshay Kumar for a fun-filled video, which was actually a reminder for the song release. "Aaaaaaa aeeeeiiinnnn. Poster lagenge fir ek baar, jab saath honge mere favourite Mr Khiladi Akshay Kumar," the 28-year-old actor captioned the video.

Kriti Sanon and Kartik Aaryan co-star with actors such as Aparshakti Khurana, Pankaj Tripathi and Vinay Pathak in the film. Directed by Laxman Utekar, Luka Chuppi is all set to hit screens on March 1.