Luka Chuppi clashed with Sonchiriya at the box office 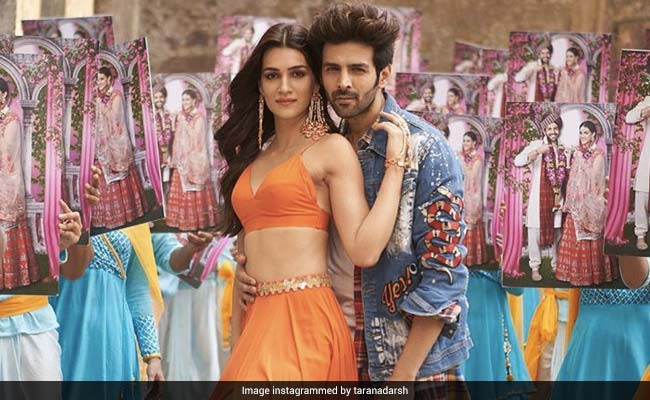 Laxman Utekar's Luka Chuppi, starring Kartik Aaryan and Kriti Sanon, is ruling the box office and how. The film which opened in theaters on Friday, has managed to collect Rs 40.03 crore within 4 days of its release, reports Bollywood trade analyst Taran Adarsh. According to Taran Adarsh's latest tweet, Luka Chuppi "made the most of the partial holiday (Mahashivratri) and earned Rs 7.90 crore on Monday. In his post, Taran Adarsh also stated that the comedy drama is likely to cross the 50-crore-mark within a week.

Luka Chuppi hit the screens on Friday and the film clashed with Abhishek Chaubey's dacoit drama Sonchiriya at the box office, which features Sushant Singh Rajput and Bhumi Pednekar in the lead roles.

The Laman Utekar-directed film opened to average reviews. Film critic Saibal Chatterjee, gave Luka Chuppi two stars out of five, in his review for NDTV and wrote: "A contrived comedy about issues that are anything but funny - the pros and cons of live-in relationships, the role of oppressive conservatism in the lives of young people, and the scourge of moral policing and political expediency - Luka Chuppi, Laxman Utekar's first Hindi film, plays hide-and-seek with logic and often loses its way."