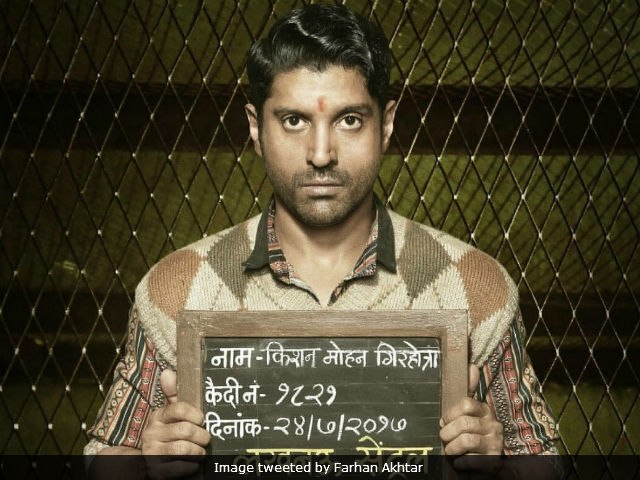 New Delhi: Farhan Akhtar and Diana Penty are all set for Ranjit Tiwari's upcoming Lucknow Central, which is set against the backdrop of a jail and features Farhan as a prisoner, who forms a music band along with other inmates. Not only fans but also Bollywood stars, who were present at a special screening of Lucknow Central, shared their excitement about the film and congratulated the actors on Twitter. Stars have used words like 'thrilling', 'fun', 'emotional' to describe Farhan's film and also appreciated it's music. Actor Ayushmann Khurrana, who recently featured in Shubh Mangal Saavdhan, tweeted and shared his favourite scene from Lucknow Central. He wrote: "Favourite scene is when Farhan Akhtar walks in with the Bachchan film playing and the climax."

#LucknowCentral is a great mix of music,fun &thrill. Fav scene is when @FarOutAkhtar walks in with the Bachchan film playing and the climax

The Rock On actor thanked Ayushmann and replied: "As an actor you can surely imagine how exciting favourite scene no 1 was to do. Big hug." Here's what he tweeted:

Thanks @ayushmannk .. as an actor you can surely imagine how exciting Fav scene no 1 was to do. big hug#4DaysToLucknowCentralhttps://t.co/0TPea37Lsm

Watched #LucknowCentral !!Love the film for its unusual concept that keeps u entertained with great performances!love love the climax!

All the best #LucknowCentral#RanjitTiwari@FarOutAkhtar@DianaPenty@nikkhiladvani Missed the screening..can't wait to watch it

Thrill, emotion, music & a brilliant cast!! The climax will leave u cheering! All the best team #LucknowCentral@FarOutAkhtar@DianaPenty

Look who the first visitor to 'Lucknow Central' was .. thank you for making the time Milkha-ji. @SoniaMilkha@JeevMilkhaSingh#5daystogohttps://t.co/DoxV9XGlcF

Thanks a lot @FarOutAkhtar - really enjoyed watching Lucknow Central with dad. Great message - never give up in life! Will remember that. https://t.co/0N4gVIEfNZ

We already can't wait to watch Lucknow Central after these tweets.

Lucknow Central - produced by Nikkhil Advani, is inspired by the true story of convicts sentenced to life imprisonment in the Lucknow Central Jail, who start a music band.

In an interview with PTI, Farhan said, "When I heard the story, I was amazed by it. The fact that these guys go out and perform, have a proper booking counter now, blew me away. They leave the jail, go out and perform and come back. It is amazing."

Promoted
Listen to the latest songs, only on JioSaavn.com
The 43-year-old actor says he watched a documentary made on the inmates to understand their life and also watched them play live.

Lucknow Central will hit the screens on September 15.