Locked Down, Sussanne Khan Is Dealing With The "Fear Outside" By... 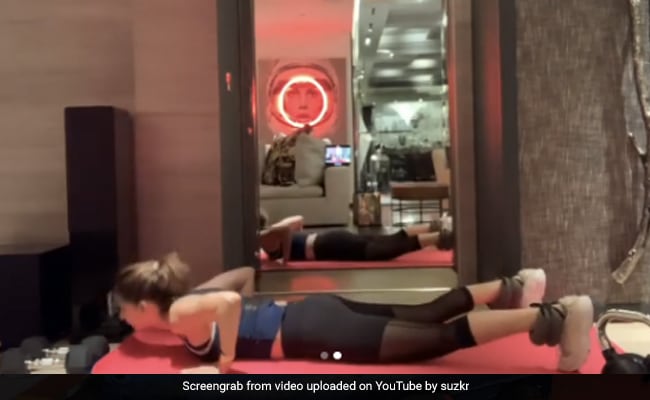 Sussanne Khan in a still from the video. (courtesy: suzkr)

Sussanne Khan just let the world know about her fitness goal. It is "chasing endorphins". Sussanne's latest upload has her exercising in front of a mirror. The 42-year-old is wearing black gym wear with her hair tied in a high ponytail. The caption says, "Is this deja vu? Now, we will try to stay blind to the hope and fear outside. Hey child, stay 'wild' and chase those endorphins." The hashtag reads, "#burpeesburpeesburpees and #legday." Susanne's post comes at a time when there is a spike in coronavirus cases. The government in Maharashtra, one of the worst-hit states, has imposed "night curfew" and lockdown during weekends till April 30. Sussanne's friend Vinita Chaitanya thinks the post is "awesome". So far, the motivational workout video has garnered over 10,000 likes.

The interior designer is set for a summer upgrade as she recently chopped her hair. In one of the latest posts, Sussanne declared she is "summering it up." You can check out the all-new pretty look in the selfie. Sussanne can be seen wearing a black tank top paired with knee-length shorts.

Previously, Sussanne uploaded a clip of sweating it out while looking at her own reflection. She added an inspiring description to it saying, "Jump, stand up, step down and jump again. Practice makes you perform better." She also asked fans to "breathe again" and "listen to the silence."

A while back, Sussanne appreciated rumoured beau Arslan Goni's workout click. Actor Hrithik Roshan's ex-wife did not shy away from calling it a "faaab pic". The duo was spotted partying together and the photos went viral on the internet.

According to a PinkVilla report, Sussanne and Arslan have known each other for more than six months now. The two met through common friends from the TV industry.