"Lockdown Ka Fayda", Kartik Aaryan Got To Celebrate His Sister's Birthday At Home

Highlight of the post - Kartik's made a small cake. Sorry, a big biscuit 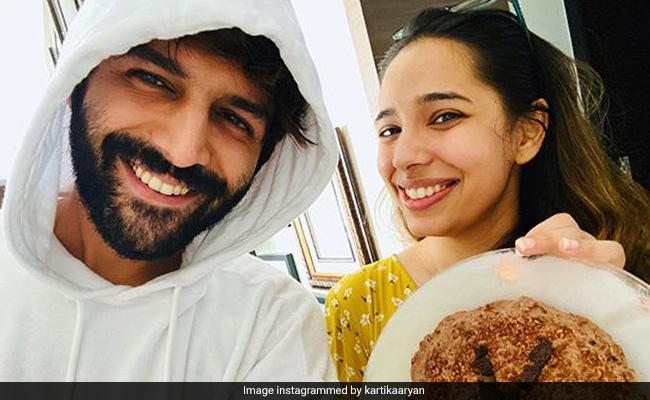 Kartik Aaryan did the sweetest thing on his sister Kritika Tiwari's birthday. The Pati Patni Aur Woh actor, who is currently at home with family due to the nationwide lockdown, finally got to celebrate his sister's birthday after seven years. On Wednesday, Kartik Instagrammed a set of lovely pictures featuring his sister and the "cake/biscuit" which he made for her and wrote an adorable wish for "the pride of the family" Kritika. Kartik, who never fails to keep his Instafam amused with his hilarious videos and captions, gave his fans a sneak peek of his version of "lockdown ka fayda (advantage of lockdown)" and wrote, "Lockdown ka fayda - Celebrating Kittu's bday together after 7 years." He also accompanied the birthday wish with a little poem, "Chota Cake Banane gaya, bada Biscuit ban gaya (Went to make a small cake, made a big biscuit instead). Happy Birthday Doctor KiKi, Pride of the family."

Last year, Kartik Aaryan's birthday wish for sister Kritika came with an announcement of Kritika receiving the MBBS degree. The proud brother Instagrammed a set of pictures featuring his sister with the degree and wrote, "Wish you a very Happy Birthday 'Doctor' Kittu and its a double celebration for us in the family as you hold your MBBS degree today. Mummy-Papa ka sapna poora hua... main na sahi, tum toh Doctor bani (Our parents' dream came true. I couldn't but at least you became a doctor).

Wish you a very Happy Birthday 'Doctor' Kittu and its a double celebration for us in the family as you hold your MBBS degree today Mummy-Papa ka sapna poora hua... main na sahi, tum toh Doctor bani @dr.kiki_ So so proud of you and sorry my little sister for not being able to be with you on your special day... Love you a lot

On the professional front, Kartik Aaryan was last seen in Imtiaz Ali's Love Aaj Kal opposite Sara Ali Khan. The actor will next be seen in Bhool Bhulaiyaa 2, co-starring Kiara Advani and Tabu.