The actress received a trophy at the Lions Gold Awards 2022 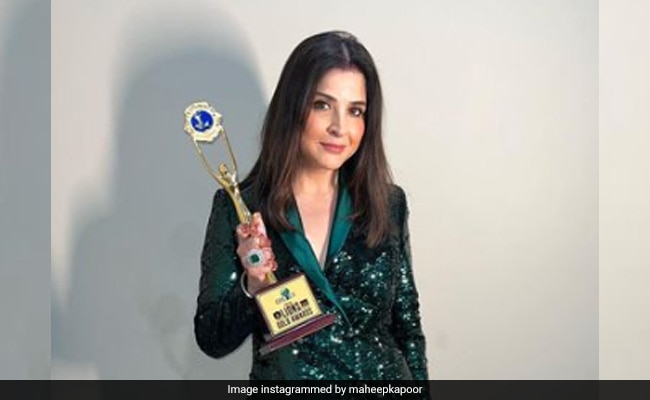 Fabulous Lives Of Bollywood Wives star Maheep Kapoor's latest post calls for a celebration. The actress received a trophy at the Lions Gold Awards 2022 on Friday. Sharing the achievement with her fans, Maheep posted photos of herself proudly showing off her trophy. She looks stunning in a green shimmering pantsuit by designer Shrdha Marwah Trehan. In the caption, she wrote: “This is the best part, when your work gets recognition. And Shrdha, you made my night sparkle more, my outfit was Ahhhmazing! Loved it…want more!” Within minutes, Maheep Kapoor's post was flooded with congratulatory messages from her family and friends. Her brother-in-law, actor Anil Kapoor, called her “lioness” and commented: “Congratulations Maheep…the lioness.”

A quick glance through Maheep Kapoor's Instagram timeline shows how much she enjoyed celebrating Karwa Chauth with her husband, actor Sanjay Kapoor, and her group on Thursday. She shared stunning pictures of herself in a moss-green outfit. Maheep completed her look with jewellery designed by herself.

Sanjay Kapoor also shared pages from his and Maheep Kapoor's Karwa Chauth diaries. He just used the hashtags, “About last night” and Karwa Chauth” in the caption.

Maheep Kapoor is known for starring in Netflix's show Fabulous Lives Of Bollywood Wives. It also features her BFFs Bhavana Pandey, Seema Kiran Sajdeh and Neelam Kothari. Recently, Maheep also made an appearance on Karan Johar's talk show Koffee With Karan with longtime friends Gauri Khan and Bhavana. It was her debut episode on KWK.