Just hours after Dilip Kumar's death, Maharashtra Chief Minister Uddhav Thackeray tweeted that the actor would be given a final farewell with state honours 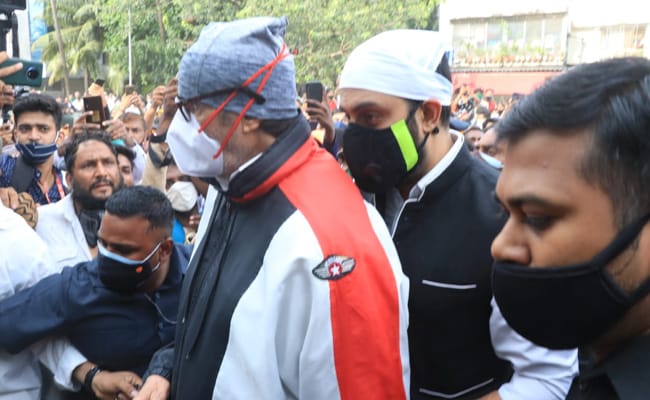 Dilip Kumar, who died at the age of 98, was buried with state honours at the Juhu Cemetery in Mumbai's Santacruz on Wednesday evening. The funeral was relatively muted because of COVID restrictions - only family and close friends attended; most of the actor's celebrity colleagues paid their last respects at his residence earlier in the day. Actor Amitabh Bachchan was among the handful of celebs, who attended Dilip Kumar's funeral. Amitabh Bachchan was accompanied by his son, actor Abhishek. Mr Bachchan co-starred in 1983 film Shakti. Earlier, Mr Bachchan mourned Dilip Kumar on Twitter in these words: "An epic era has drawn curtains... Never to happen again." 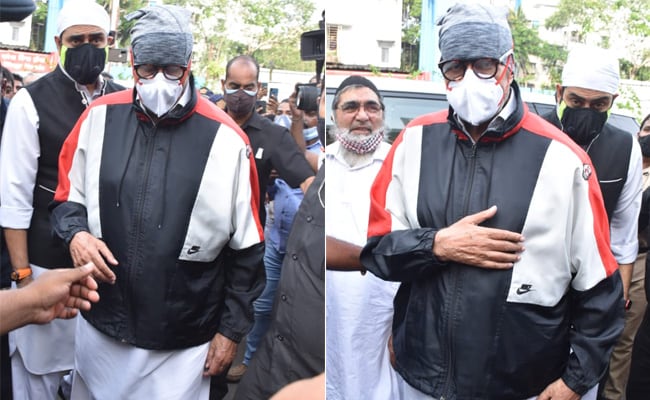 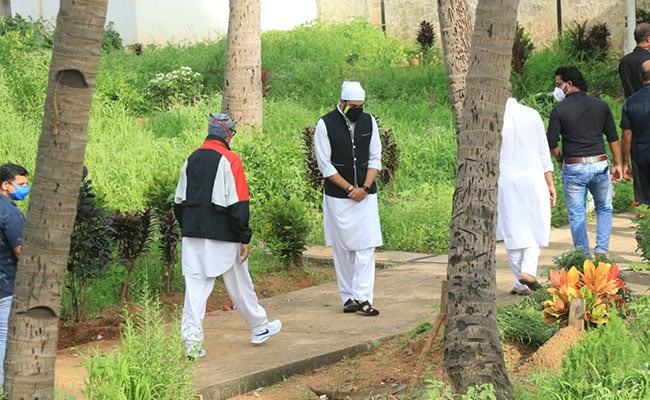 Filmmaker Subhash Ghai, who directed Dilip Kumar in 1991 movie Saudagar, attended the funeral with his wife Mukta. Dilip Kumar's wife Saira Banu, who was photographed at the cemetery, was surrounded by a support group of well-wishers and police personnel. See pictures from Dilip Kumar's funeral here: 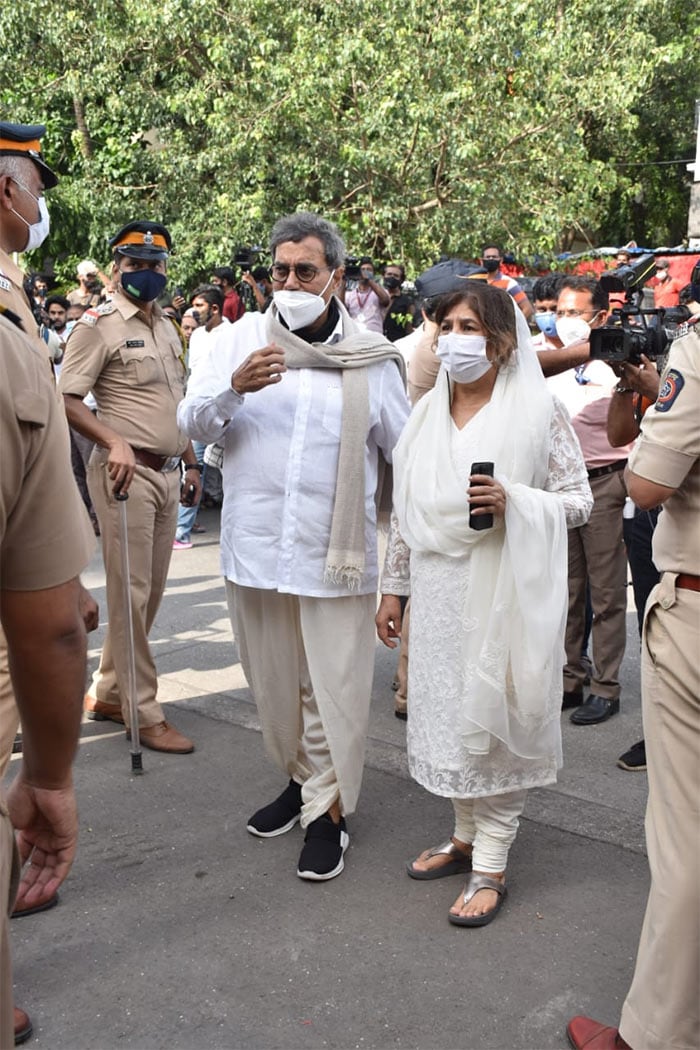 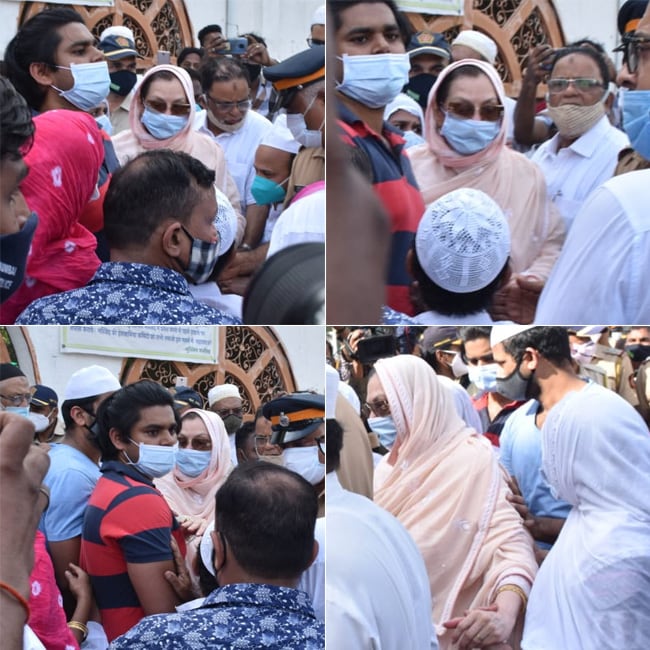 Dilip Kumar and Saira Banu's family friend Faisal Farooqui tweeted this clip of the actor being draped with the tricolour:

Dilip Kumar died on Wednesday morning after spending a week in Hinduja Hospital. Family friend Faisal Farooqui shared this tweet: "With a heavy heart and profound grief, I announce the passing away of our beloved Dilip Saab, few minutes ago. We are from God and to Him we return." Dilip Kumar is survived by his wife of over 50 years, Saira Banu, who was constantly by the actor's side during his stay in hospital - he was admitted twice in the span of a month after complaining of breathlessness.

With a heavy heart and profound grief, I announce the passing away of our beloved Dilip Saab, few minutes ago.

We are from God and to Him we return. - Faisal Farooqui

Hours after Dilip Kumar's death, Maharashtra Chief Minister Uddhav Thackeray tweeted that the actor would be given a state funeral. In the afternoon, Uddhav Thackeray visited Dilip Kumar's wife Saira Banu at her residence along with son Aaditya, who tweeted: "Paid our respects to the legend, Dilip Kumar Saheb. He will be accorded state honours today."

Paid our respects to the legend, Dilip Kumar Saheb. He will be accorded state honours today. pic.twitter.com/eXkZLyjVCR

Dilip Kumar was revered by his peers and younger colleagues. After his death, Saira Banu was visited by several celebs such as Shah Rukh Khan, Anil Kapoor, Anupam Kher, Dharmendra, Shabana Azmi, Ranbir Kapoor and Vidya Balan, among others. News agency ANI shared a heart-wrenching moment on Twitter, in which Shah Rukh Khan can be seen consoling Saira Banu. 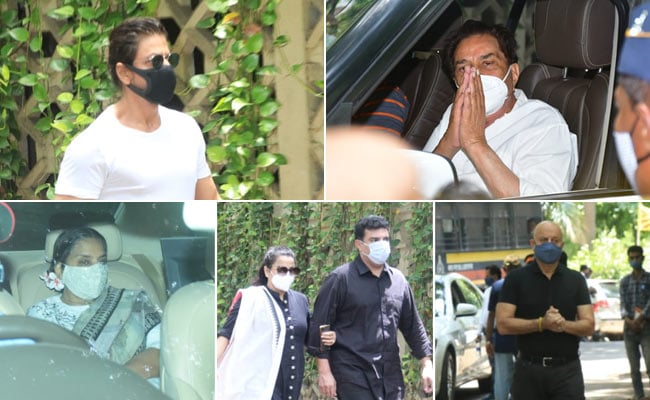 Dilip Kumar, who was born Mohd Yusuf Khan in Peshawar, was best known for his starring roles in films like Madhumati, Devdas, Mughal-e-Azam, Ganga Jamuna, Ram Aur Shyam and Naya Daur in a career spanning over six decades. Dilip Kumar and Saira Banu, who married in 1966, starred together in films such as Sagina, Mahato, Chhoti Bahu and Duniya. Dilip Kumar was honoured with the Padma Bhushan in 1991 and the Dadasaheb Phalke Award in 1994. Dilip Kumar, who was the first ever winner of the Filmfare Best Actor prize, won eight Filmfare Best Actor awards, a record he shares with Shah Rukh Khan.