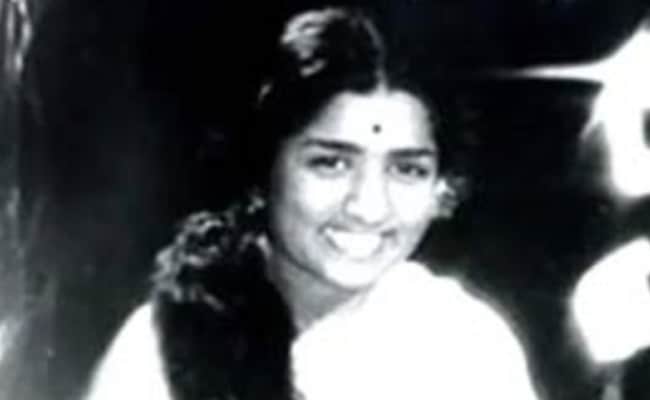 In the 1940s, a fresh voice took India by storm. It was Lata Mangeshkar who left all music lovers in rapture with each of her songs. The music sensation, who impressed generations with her melodious voice, will forever remain in our hearts. The esteemed singer has gifted us several evergreen songs over the decades. And, we continue to cherish them. The subtlety of emotions in her voice and the clarity of notes won the hearts of thousands of listeners and music maestros alike. Lata Mangeshkar's name is now synonymous with one of the golden eras in Hindi cinema. Here's raising a toast to some of her most memorable solo songs:

Lata Mangeshkar effortlessly channelled a sense of charm and melancholy into this classic number. The song was featured in the 1960 film Dil Apna Aur Preet Parai.

Lata Mangeshkar won the country over with this song from the film Baharon Ke Sapne. RD Burman composed the music while Majrooh Sultanpuri penned the lyrics for this number.

Lata Mangeshkar once again teamed up with music director RD Burman to give us this number that captures the essence of young love.

Lata Mangeshkar rendered this RD Burman composition with the ease of a veteran. Gulzar's lyrics only add to the magic that is this number.

We can't thank Lata Mangeshkar enough for this dreamy melody from the film Intaquam.

The film Pakeezah featured one of Lata Mangeshkar's most popular solo numbers. This classic was composed by Ghulam Mohammad and Majrooh Sultanpuri penned the lyrics.

Lag Ja Gale is one of the most popular love songs and for good reason. Despite several modern-day renditions and covers by artists, her original rendition from the film Woh Kaun Thi remains unparalleled.

Lata Mangeshkar won hearts with this classic composed by the duo Laxmikant-Pyarelal for the film Prem Rog.

Abhimaan, the film, was as much a testament to Lata Mangeshkar's singing prowess as it was to the acting abilities of Jaya Bachchan and Amitabh Bachchan. The music for this film was composed by SD Burman.

Lata Mangeshkar's songs will forever remain in our hearts.