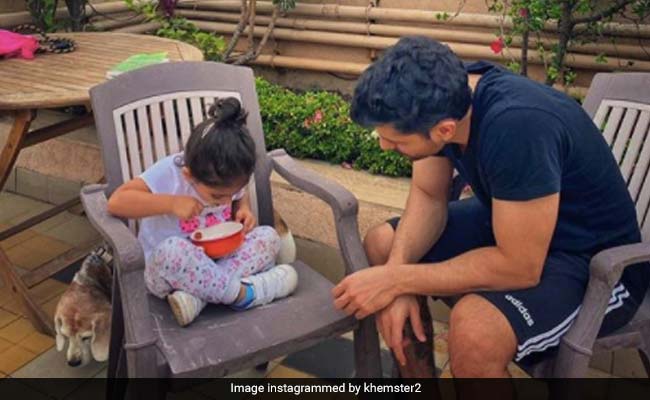 Kunal Kemmu never fails to brighten our days with super adorable pictures with his and Soha Ali Khan's daughter Inaaya. On Thursday, Kunal Kemmu shared another snippet of their father-daughter time and it has our heart. In the picture, Kunal and Inaaya can be seen sitting outside as Inaaya can be seen looking down while Kunal Kemmu can be seen looking at her. The picture also features their pet pooch sitting under a chair. Sharing the super cute picture, Kunal Kemmu adorably referred to Inaaya as his "personal little sunshine" and wrote, "My personal little sunshine under the dark clouds." The father-daughter duo can be seen sitting under an overcast; monsoon already arrived in Mumbai. Take a look at this adorable picture of Kunal Kemmu with Inaaya here:

My personal little sunshine under the dark clouds

Kunal Kemmu keeps treating his Instafam to beautiful pictures and videos featuring 2-year-old Inaaya. A few days back, Kunal Kemmu shared a video featuring a glimpse of his and Inaaya's yoga session for upcoming International Yoga Day, to be celebrated on June 21. "Preparing for International Yoga Day. PS - both of us were having a bad hair day," Kunal captioned the video.

Preparing for world yoga day P.s: both of us were having a bad hair day

Kunal's posts with Inaaya are a treat to watch. We are yet to get over the video where Kunal and Inaaya exercised together. "I got the best trainer in the business," Kunal wrote. Take a look:

I got the best trainer in the business

Here's how Kunal Kemmu and Inaaya flipped "into the weekend."

Flipping into the weekend. #girlpower #toddlerpower

Here's another adorable picture of Kunal and Inaaya looking into each other's eyes. "The stories you tell me are so much more fun than the ones I read to you," wrote Kunal. Aww.

Soha Ali Khan and Kunal Kemmu got married in January, 2015 in Mumbai. They welcomed their daughter Inaaya in 2017.

Kunal Kemmu is best-known for his performances in films such as Golmaal Again, Go Goa Gone, Blood Money, Golmaal 3 and Kalank among others. He was last seen in the 2020 action-thriller Malang where he shared screen space with Aditya Roy Kapur, Disha Patani and Anil Kapoor. On the other hand, Soha Ali Khan was last seen in the 2018 romantic-thriller Saheb, Biwi Aur Gangster 3 which starred Sanjay Dutt, Jimmy Sheirgill, Mahi Gill and Chitrangada Singh in leading roles.