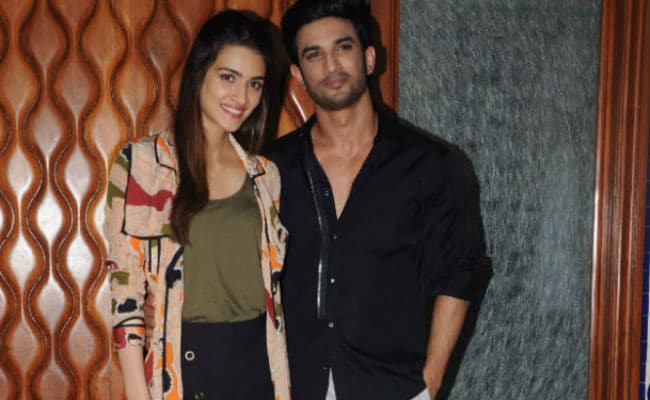 Are Sushant Singh Rajput and Kriti Sanon breaking-up? Well, they might as Sushant wants to apparently 'concentrate on work,' a mid-day report states. Sushant and Kriti, who co-starred in 2017's Raabta, are rumoured to be dating for a while now. However, they haven't ever acknowledged a romance. The mid-day report states that Sushant "doesn't want undue attention on his bonding with Kriti and he wants to be written about only his work." Sushant is currently with Kizie Aur Manny in Jamshedpur while Kriti recently wrapped the London schedule of Housefull 4. After Raabta's box office debacle, the duo haven't signed a film together but, featured in a commercial.

However, fans waiting to see Sushant and Kriti together on screen, can look forward to watching them in a Nitesh Tiwari-directed film. Kriti has met Mr Tiwari but there is no confirmation about Sushant yet. "While the filmmaker was in talks with a few actors for the part, he was keen on Kriti - he was impressed with her performance in Bareilly Ki Barfi (2017), which was written by him. The two met recently to discuss the project. Kriti is quite excited about the script. It's in the final stages of discussion, but she is yet to sign on the dotted line. One can expect the final announcement later this month," a source told mid-day.

During Raabta's shooting, when Kriti was asked if she's dating Sushant, she told news agency IANS, "It happens every time you work with someone but I clarified what I had to online. Beyond that, I have nothing more to say. I really don't know what to say. It is the easiest thing to assume. I said what I wanted to. It reached a point where families started getting involved which was a little nasty."

Sushant Singh Rajput's Kizie Aur Manny is the Hindi remake of The Fault In Our Stars. Sushant co-stars with actress Sanjana Sanghi in the film. In Housefull 4, Kriti co-stars with Akshay Kumar, Bobby Deol, Ritiesh Deshmukh and Pooja Hegde.