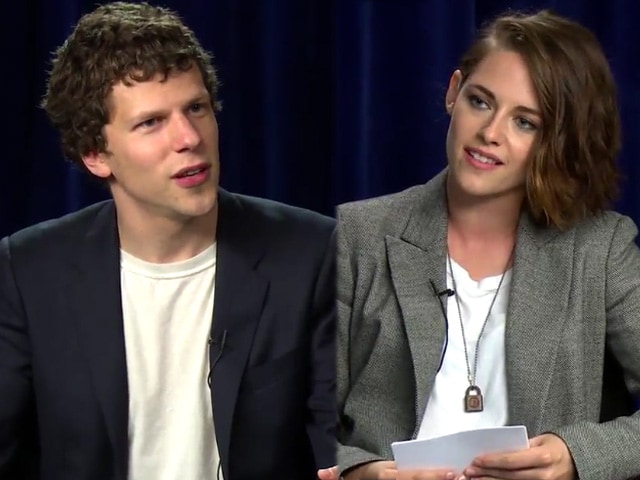 Jesse Eisenberg and Kristen Stewart in a still from Funny or Die.

New Delhi: Offence is the best defence in the fight against Hollywood sexism, the latest skirmish in which was set in a virtual battlefield of the web series Funny Or Die. Actors Kristen Stewart and Jesse Eisenberg, promoting their upcoming film American Ultra, interviewed each other and it would have been just another day at work for Jesse had the questions that were put to him been the ones he was expecting.

Amid rising incomprehension on Jesse's part, Kristen's next few questions asked him to reveal who he was dating, what his favourite chemical peel was, whether he had a favourite breast (yes!) and also required him to display his hand to the mani-cam.

By now, the lightbulb's probably gone off in your head as you realise this is an episode in an ongoing battle against the sexism that's perpetuated in celebrity interviews where female stars are asked questions that relate to their appearance, personal lives and wardrobes and male stars are asked about their movies and preparing for their roles.

Kristen, as you might recall, described Hollywood as "disgustingly sexist" in an interview with Harper's Bazaar in April. She's had a tiny bit of revenge now, even if it was staged. Jesse did a fine job of pretending he didn't know Kristen was asking him the questions she's generally asked. Watch:

Just months ago, Mark Ruffalo didn't have to pretend, in an interview with Cosmopolitan UK in which he handled the questions on red carpet poses and workout regimes that co-star Scarlett Johansson.

Voices raised against showbiz sexism are getting increasingly louder. Actresses like Reese Witherspoon and Cate Blanchett have slammed 'red carpet sexism' with the hashtag #AskHerMore trending on Oscar day. This year's Best Supporting Actress Patricia Arquette called for wage equality in her speech, cheered loudly by Meryl Streep and Jennifer Lopez in the audience.