Koffee With Karan 7: Kareena Kapoor, Karan Johar And The Many K3G References. Bring It On

Ready for the Koffee tonight? 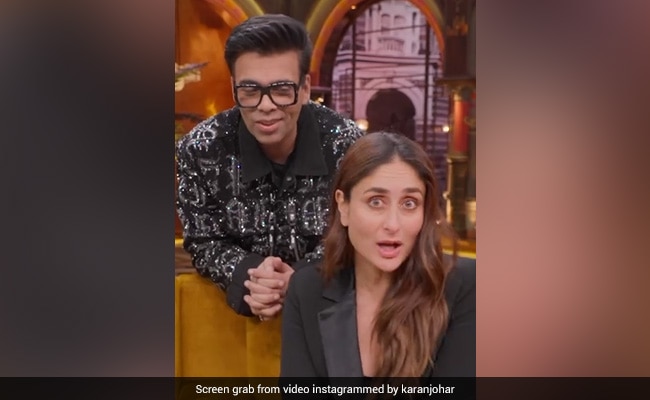 Karan Johar and Kareena in a still from the video. (courtesy: karanjohar)

Expect a lot of Kabhie Khushi Kabhie Gham references in the upcoming episode of Koffee With Karan 7, where OGs Kareena Kapoor and Aamir Khan will be the guests. Ahead of the episode's arrival, Karan Johar posted a video, in which he asks Kareena: "Coffee tonight?" and she replies in a typical Poo fashion: "Tell me how it was." KJo's expression is just too good. The K3G scene that KJo and Kareena recreated in the video is when college heartthrob Robbie asks Kareena's character Poo for a movie and she replies " Tell me how it was." Sharing the video, KJo wrote: "The return of Poo aka Bebo aka the one and only Kareena Kapoor on the Koffee couch. Koffee With Karan S7 new episode streams tonight from 12am only on Disney+Hotstar."

In a promo video shared from the episode, Kareena Kapoor was seen rating Aamir Khan's fashion sense. She said "Minus." (Taking a leaf from the famous K3G prom selection scene).

Karan Johar, who directed K3G and Kareena Kapoor, who famously starred in the film, often recreate the scenes from the movie at every chance they get. At Kareena's cousin Ranbir Kapoor's wedding in April, Karan Johar and the actress posted a picture together with a (no points for guessing) K3G reference. "Kaun hai yeh jisne doobara mudke humein nahin dekha?" wrote Kareena Kapoor.

Ahead of the episode's shoot, Kareena Kapoor shared these stunning pictures of her OOTD and she wrote: "I like my Koffee black."

Kareena Kapoor and Aamir Khan are busy with Laal Singh Chaddha promotions and their next stop is the Koffee With Karan 7 couch. The new episode streams tonight from 12 am only on Disney+Hotstar. Excited much?