Koffee With Karan 7: Kapoor Vs Kapoor With Sonam And Arjun, Up Next

"Sonam is back, ladies and gentlemen," Arjun Kapoor says in the promo 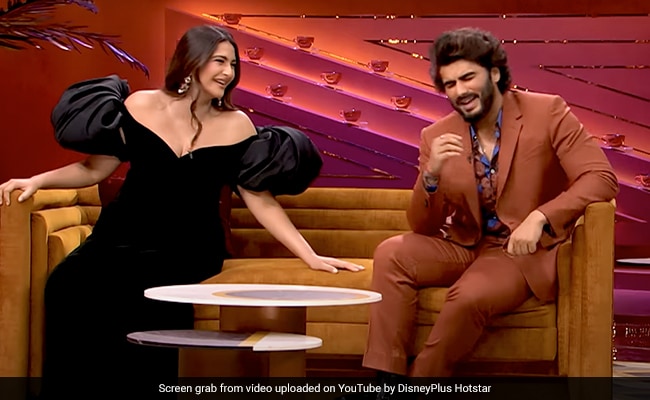 Sonam and Arjun on Koffee With Karan 7. (courtesy: YouTube)

Sonam Kapoor and cousin Arjun Kapoor are Karan Johar's new guests on Koffee With Karan 7 and we can't wait for the episode to air. Arjun Kapoor perfectly encapsulated the essence of the episode when he said, "Sonam is back, ladies and gentlemen" and he couldn't be more right. The promo begins with Arjun Kapoor mentioning the most "annoying" thing about Sonam Kapoor. "She doesn't wait for others to compliment her," said Arjun. To which, Sonam replied, "It comes from being Anil Kapoor's daughter. " When KJo asked Sonam, How many friends of hers has Arjun Kapoor slept with, she said, "I am not discussing it, between my brothers, there's no one left." Arjun's reaction: "What kind of sister are you? What are you saying about us? Why does it feel like I have been called on the show for being trolled by Sonam."

Arjun Kapoor was asked how he has saved the contact of girlfriend Malaika Arora on his phone, to which he replied that it's Malaika only because he likes her name.

When Sonam Kapoor was asked who does she think is the "man of the moment," she said, "Ranbir is the best because I see him everywhere. He is promoting Ayan's (Mukerji) film." When KJo asked her if she knew what it is called, she said, "Shiva number 1." Arjun added, "You're a mess, yaar Sonam."

Check out the promo of the new Koffee With Karan 7 episode:

Sharing the teaser, the show's host Karan Johar wrote: "This episode is all about the S and M : side-splitting laughter and mind-boggling revelations. Watch the sixth episode of #HotstarSpecials #KoffeeWithKaranS7 streaming this Thursday from 12:00am only on Disney+ Hotstar."