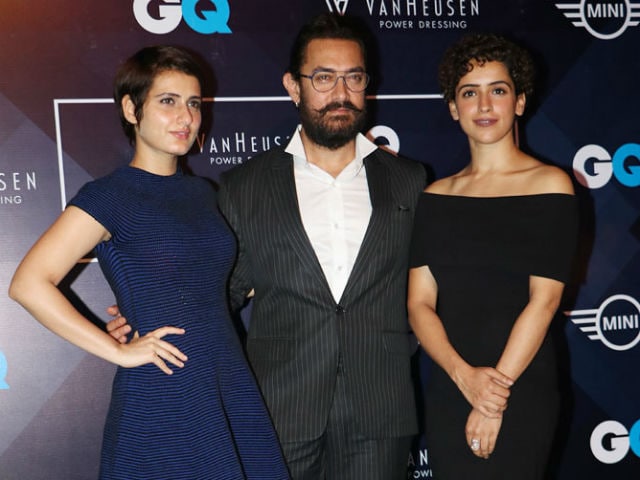 New Delhi: Aamir Khan fans, rejoice. After the powerful song from his much-anticipated film Dangal was released on Thursday, we have a piece of good news for all of you. Excited, much? You should be. The 51-year-old actor is all set to appear on Karan Johar's chat show Koffee With Karan 5 with his Dangal daughters. Actresses Fatima Sana Shaikh and Sanya Malhotra will also be seen giving company to their Haanikarak Baapu. The trio will be shooting for the episode this weekend. This will be the first time people will watch Aamir and his onscreen daughters in a candid conversation on television. Just days ago, Aamir complained that host Karan wasn't inviting him on the show. Karan clearly got the message loud and clear.

At a fashion event held in Mumbai last weekend, Aamir told reporters: "I would definitely want to go to Koffee with Karan, but he is not calling me,." Presumably the invitation arrived after this. And since he goes nowhere without Sanya and Fatima now (yes, they were at the fashion event), all three will share the Koffee couch. Hope there's space, Karan Johar. Arjun Kapoor looked a bit uncomfortable stuck between Ranveer Singh and Ranbir Kapoor on a previous episode.

Dangal is based on the real life story of Haryanvi wrestler Mahavir Singh Phogat, played by Aamir Khan. The film chronicles how Mr Phogat trains his daughters Geeta and Babita in wrestling, challenging the patriarchal restrictions of his village in order to do so. Dangal has made headlines for its impactful trailer, empowering story and inspiring songs. The film is directed by Nitesh Tiwari and will release on December 23.

Aamir Khan, who usually treats chat shows with the same disdain he does award ceremonies, made an appearance on the fourth season of Koffee With Karan along with his wife Kiran Rao.

Promoted
Listen to the latest songs, only on JioSaavn.com
This year's Koffee With Karan is special as the Khan trinity will be seen on the show for the first time. The fifth season opened with Shah Rukh and Alia Bhatt and now it's Salman Khan's turn to appear on the special hundredth episode with his brothers Arbaaz and Sohail. We are not very sure when Aamir's episode will be aired but it's going to be interesting to watch him speak about the film, his experiences and his relationship with his onscreen daughters.

We are also expecting Shahid Kapoor and Mira Rajput on the show soon. The actor's otherwise shy wife is expected to reveal details of their "arranged' marriage.