Koffee With Karan 5: Parineeti Chopra Owns The Show Like A Boss 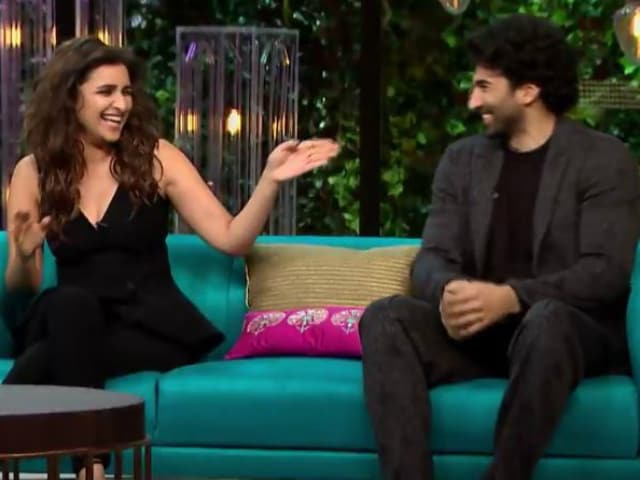 Koffee With Karan 5: A still from Parineeti, Aditya's episode

New Delhi: Koffee With Karan 5 has been trending even before Karan Johar debuted the fresh season of his show on November 7, and it continues. Koffee With Karan 5 has aired four of its episodes by now with last night's guests being Ranveer Singh and Ranbir Kapoor, and we are expecting actors Parineeti Chopra and Aditya Roy Kapur next. Shah Rukh Khan and Alia Bhatt kicked off Koffee With Karan 5 and combinations like Akshay Kumar-Twinkle Khanna and Varun Dhawan-Arjun Kapoor followed. Karan, master of strategies, always precedes his show with a sneak-peek of the next one. Hence, there was Parineeti and Aditya goofing around in a video on Koffee's twitter page.

In the short clip, Parineeti can never be seen with a straight face. And trust us when we say this - her laughter is infectious. Aditya Roy Kapur, usually known for being quite reserved, was seen cracking up more than often and Karan would just grin wider every time Parineeti spoke.

A very animated Parineeti described self-obsessed Varun Dhawan on the sets and said that he even has the potential to convince girls to go shirtless. No wonder Aditya was successfully convinced. "He's crazy, that guys," said Parineeti. Parineeti featured in a song in Varun's Dishoom. When it was Aditya's turn to name a celeb who is most likely to make out in public, he replied in no time: "Parineeti."

Promoted
Listen to the latest songs, only on JioSaavn.com
Parineeti also shared the meanest, funniest thing she has heard about herself - "Parineeti looks like a hot air balloon," and added: "Which was also true at one point."

Parineeti Chopra , 28, and Aditya Roy Kapur, 31, are co-stars of 2014 film Daawat-e-Ishq, and are all set to sip Koffee with Karan Johar coming Sunday.