Koffee With Karan 5: Karan Johar Once Made Fun Of Kangana Ranaut's English. She Hasn't Forgotten 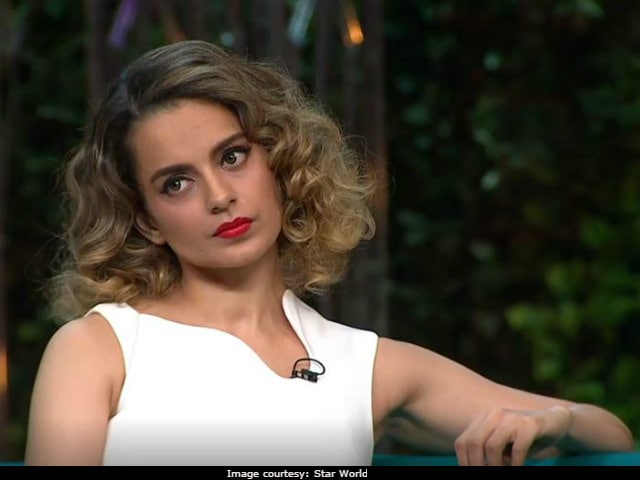 Koffee With Karan 5: A still from the show (courtesy: Star World)

New Delhi: Actress Kangana Ranaut was one of Karan Johar's guests on the Koffee With Karan episode which aired on television on Sunday night. Apart from making explosive remarks in general, Kangana left no opportunity to take digs at the show host. Mid-way through the show, she declared Karan has "verbal diarrhea." Very politely, Kangana referred to Karan as an example of nepotism in Bollywood. Kangana, who continued to deadpan, also confessed that Karan has been the "driving force" in her life. Kangana's brutally-honest statements made for some really strong koffee, which Karan Johar surely was not expecting. Kangana was also announced the winner of the Rapid Fire Round, which Kangana jokingly said is perhaps Karan's attempt to "redeem" himself. Kangana was accompanied by her Rangoon co-star Saif Ali Khan on the koffee couch.

Here are some of the highlights of the show:

Karan Made Fun Of Kangana's English, She Remembers

Beginning of the show, Karan introduced Kangana as a two-time National Award winner and said that he's a fan of Kangana's performance, especially after watching Queen and Tanu Weds Manu. Previously, Karan said that he thought, "Nothing would happen to her." Kangana, who simply could not hold herself with a simple 'Thank you,' added: "I'm so happy to hear this from you as well because you've been the driving force in my life. If it wasn't for your rejections and mocking and all those... of course you made fun of my English on this and you made fun of everything. I'm not complaining about it. I'm just saying. Somewhere these things do drive you."

Karan introduced his show as "unapologetically frivolous" when Kangana said: "No, me and Saif are going to give it some dignity. Saif is the real nawab and I'm the filmy queen. So, we need to make sense of the show. We need to do that." Karan's comeback was: "The person who is helming the show doesn't want to make any sense of the show. So, I don't know how much you'll manage."

When Karan Was Accused Of Twisting Alia's Words

Alia Bhatt, who also has appeared on Karan's show, had once told him: "I love Kangana's airport look but I don't know where she is going." As Saif rolled his eyes, Kangana explained that Alia's response was to the question " 'Who would you like to stalk?' Karan is putting words in her mouth! And now Saif, you're putting words in my mouth to say something."

Karan, Please Explain What You mean By 'Magnificent Absence'

In his recently released autobiography titled 'An Unsuitable Boy', Karan wrote that Kangana "made a branding out of her absence. People have a magnificent presence; she has a magnificent absence." This left Kangana a little confused, when and she said: "Is it a jibe or a compliment? Is the absence because I'm missing from your parties or on the gossip circle or skipping filmi parties and award shows. I don't feel I am absent."

Promoted
Listen to the latest songs, only on JioSaavn.com
"Karan Johar is a star and he has given me a lot of unnecessary attitude," said Kangana. She went on to add: "In my biopic, if ever it's made, you'll play that stereotypical Bollywood biggie, who is like you know...very snooty and completely intolerant towards outsiders, flag bearer of nepotism, the movie mafia." Karan got owned.

Karan Johar summed up his experience on the show saying: "Kangana has really attacked me on this show. I love that." Kangana Ranaut and Saif Ali Khan form two thirds of the love-triangle in their upcoming war drama Rangoon. The Vishal Bhardwaj-directed film also stars Shahid Kapoor, who briefly joined the Kangana and Saif on the show. Rangoon releases on February 24.