Koffee With Karan 5: Jacqueline Fernandez And Sidharth Malhotra Are Not Shy on The Couch 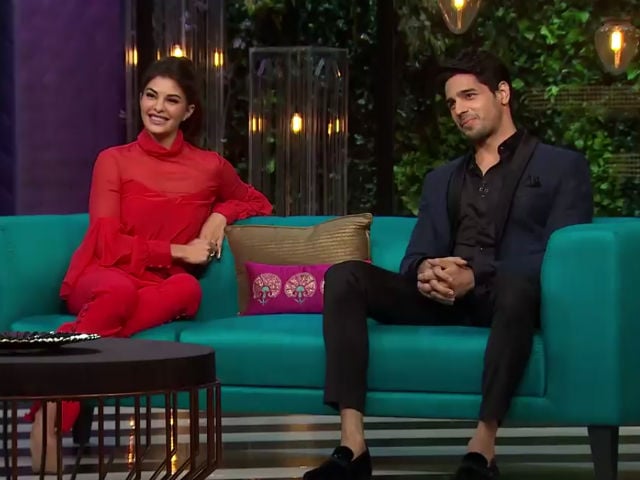 Koffee With Karan 5: Jacqueline Fernandez and Sidharth Malhotra will co-star in Reload

New Delhi: After the 'romantic' ninth episode of Karan Johar's chat show Koffee With Karan, that featured Shahid Kapoor and his wife Mira Rajput, actors Jacqueline Fernandez and Sidharth Malhotra are all set to nail the show with their humour, 'adult talks' and looks. The episode's teaser was unveiled by the makers of the show on Sunday night, where we can see Jacqueline only giggling while Sidharth makes some 'naughty' revelations about him. Karan even asks the Reload co-stars about what exactly is brewing between them. Jacqueline and Sidharth, both 31, have earlier worked together in 2015's Brothers, co-starring Akshay Kumar. They will now be seen in an action entertainer Reload. The film is slated to release on August 25. Video: Watch the promo of Jacqueline Fernandez and Sidharth Malhotra's Koffee With Karan 5 episode here:

When Karan asked the duo about Jacqueline being spotted leaving Sidharth's house, the actor quickly answers that they were 'reading scripts'.

Sidharth seems to have done many 'things' so far- from having phone sex to taking a shower with someone. It was revealed by the actor himself during the 'Koffee shots with Karan' segment.

Here's what Sidharth has to say about appearing on Koffee:

Jacqueline, who is making her Koffee debut also thanked Karan.

Today for my first ever #koffeewithkaran and my last working day of 2016!! @karanjohar you are officially my #santaclaus and thank you my little elves @danielbauermakeupandhair @tanghavri @rjanahavi @prabalgurung I love you guys

Promoted
Listen to the latest songs, only on JioSaavn.com
Their upcoming film Reload is the sequel of Hrithik Roshan and Katrina Kaif's Bang Bang. Produced by Fox Star studios, the film is directed by Raj Nidimoru and Krishna DK and also stars Suneil Shetty.

Jacqueline Fernandez was last seen in Dishoom and The Flying Jatt. She might also star in Judwaa 2, opposite Varun Dhawan. Meanwhile, Sidharth, who began his career with Karan Johar's Student Of The Year, last appeared opposite Katrina Kaif in Baar Baar Dekho.