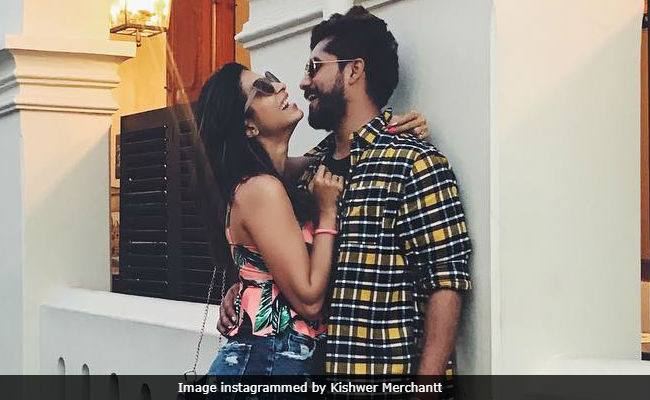 New Delhi: Sri Lanka was the place several celebrities chose to wrap 2017 and television couple Kishwer Merchantt and Suyyash Rai was one of them. Kishwer Merchantt, who is currently part of TV series Partners, posted pictures from her vacation diary on Instagram and predictably she soon started trending. In one if the pictures taken at Sri Lanka's Galle Fort, Kishwer and Suyyash steal a romantic moment, which their Instagram followers love. "Perfect jodi. Love you both," said one person in comments while another added, "Nazar na lage, awesome both of you." Here's the now viral picture of Kishwer Merchantt and Suyyash Rai on the streets of Sri Lanka.

Suyyash Rai, who stars in Rishta Likhenge Hum Naya, posted another loved up picture with Kishwer on his own Instagram page, which fans can't stop complimenting.

Kishwer Merchantt started her television career in Mukesh Khanna's Shaktimaan when she was all of 16. She became a household name by starring shows like Hip Hip Hurray, Des Mein Niklla Hoga Chand and K-soaps such as Kutumb, Kkavyanjali and Kasautii Zindagii Kay. Her other popular television shows are Ek Hasina Thi, Madhubala - Ek Ishq Ek Junoon and Savitri Devi College & HospitalM, which she quit alleging uprofessionalism on part of the producers.

Kishwer and Suyyash Rai co-starred in Pyaar Kii Ye Ek Kahaani. They opted for a court wedding in December 2016. Suyyash Rai has more reality shows on his portfolio including Bigg Boss, in which he entered with Kishwer during season 9.
Comments
kishwer merchanttsuyyash raikishwer suyyash photos