Khushi Kapoor Is Cute As A Button In New York Pic. First Comment Is From... No, It's Not Janhvi 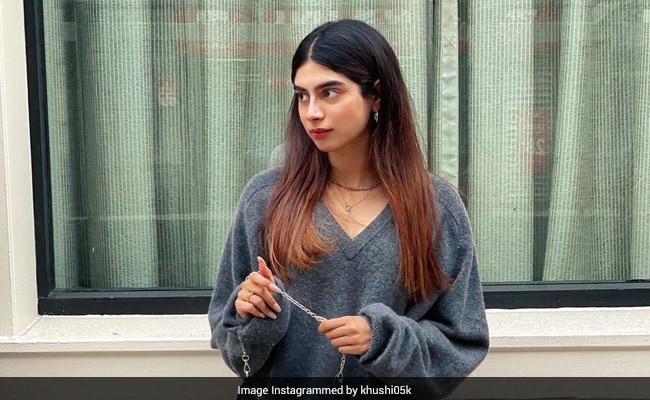 Khushi Kapoor has been adding fabulous photos to her New York diaries and well, all we want to say is keep them coming! In her latest postcard from New York, Khushi can be seen chilling on NYC streets, looking cute as a button in a cropped skirt and baggy sweater. Khushi's sister Janhvi Kapoor, who is back home in India, is usually the first one to comment on Khushi's posts but this time, it turned out to be someone else. Amitabh Bachchan's granddaughter Navya Naveli Nanda cheered for Khushi with an expression of praise for Khushi's NYC street style: "Oh oh oh," she wrote. Navya Naveli is also in New York, BTW.

Earlier on Instagram, Khushi wrote "Hello Summer," for an album, which also comes with a cute selfie of hers - she looks like a ray of sunshine in a yellow top and denims. Khushi Kapoor had also shared photos of herself boating in a Central Park lake, where she was extremely "happy" about her adventures.

Khushi Kapoor had flown out of Maximum City on September 2019 for destination Big Apple, where she is currently studying films. She returned to Mumbai in March 2020 when the coronavirus lockdown was imposed in India. After spending months at home, Khushi flew back to the US recently. Meanwhile, Janhvi Kapoor recently wrapped an envy-inducing vacation in the Maldives, photos from which trended for days on the Internet.