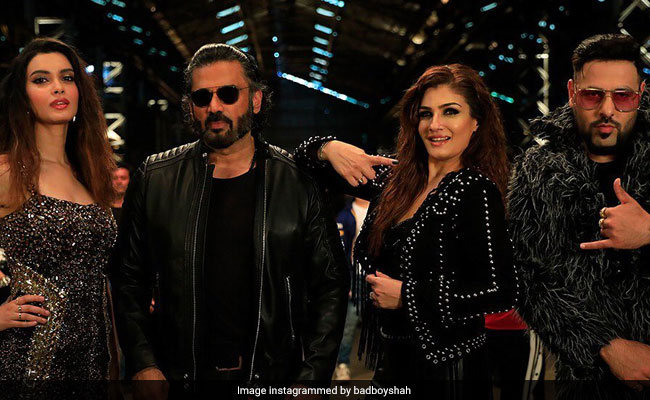 We were not even Khandaani Shafakhana's first song Koka yet and the makers released another peppy track from the film on Friday. The song is a redux version of the Nineties' iconic song Sheher Ki Ladki. The video majorly features Badshah and Diana Penty. However, Raveena Tandon and Suneil Shetty, who featured in the original version, make an appearance towards the end of the video and steal the show. The video garnered over 4 lakh views on YouTube within a few hours of its release. The song has been sung by Badshah and Tusli Kumar and it has been recreated by Tanishk Bagchi.

Badshah, who has sung the track and also features in it, shared the song on social media and wrote: "Swag super tey beats usse bhi upar" Take a look at Badshah's post here:

Speaking of his experience of filming the song, Suneil Shetty said, "It was great fun shooting with Ravs (Raveena) for this song once again along with Badshah and Diana. I absolutely love the recreated version of the song," news agency IANS reported.

Meanwhile, Tulsi Kumar, who has also sung the redux version of Sheher Ki Ladki, told IANS: "Sheher Ki Ladki is an iconic song that I have grown up listening to and it's an honour to be singing for the iconic Raveena Tandon who has been a rage of the 90s. This one is really special and is our ode to the 90s."

Khandaani Shafakhana features Sonakshi Sinha, Varun Sharma in the lead roles. The film also marks the Bollywood debut of Badshah. The film has been directed by Shilpi Dasgupta and it is slated to release on August 2 this year.