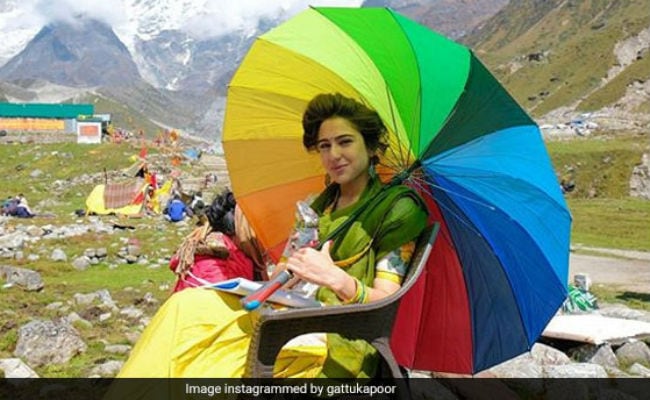 Kedarnath director Abhishek Kapoor shared a BTS photo from the sets of the film featuring Sara Ali Khan. In the photo shared by the filmmaker, Sara can be seen seated against the picturesque landscapes of Kedarnath, where a portion of the film has been shot. Referring to Sara's multicoloured umbrella, which she can be seen holding in the picture, Abhishek Kapoor captioned the photo: "Hum jahan baith te hain, indradhanush wahin se shuru hota hai, naam hai Sara Ali Khan." Sara is making her Bollywood debut with Kedarnath, which also features Sushant Singh Rajput. Kedarnath is a love story set against the backdrop of devastating Kedarnath floods that took place in 2013.

The makers of Kedarnath unveiled the riveting teaser of the film on Tuesday. The movie features Sara as a tourist-pilgrim Mukku while Sushant plays the role of a Muslim pithu (one who carries pilgrims on their back) named Mansoor. Abhishek Kapoor's wife Pragya Yadav is producing Kedarnath. Speaking at the teaser launch event of the film, Pragya in an interview to news agency IANS said that Kedarnath "is not an everyday love story". "Set against the backdrop of nature's fury, Kedarnath is not an everyday love story. Shooting on virgin and undeveloped terrain was as thrilling as it was draining. This has made the journey to completion a well-earned reward," Pragya told IANS. Kedarnath teaser has over 10 million views on YouTube.

Ahead of the teaser launch, Sara Ali Khan and Sushant Singh Rajput introduced us to the film's first poster. "No tragedy, no wrath of nature, no act of God can defeat the power of love! Presenting the official Kedarnath poster," Sara captioned the poster.

We can thank Abhishek Kapoor for continually sharing BTS photos from the sets of Kedarnath. Remember the photo shared by the filmmaker, which featured Sara Ali Khan, Sushant Singh Rajput and himself seated on a rock? Or the photo from Bhairon temple in Kedarnath, where both the actors had paid their obeisance before kick-starting the shoot?

Kedarnath, which was originally scheduled to release in June 2018, will hit the screens on December 7, 2018.