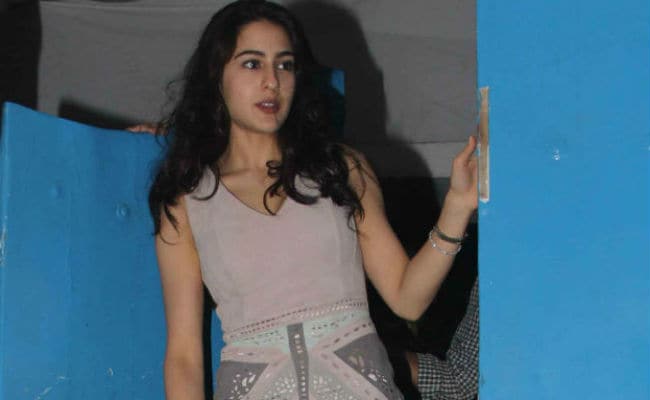 Kedarnath is slated to release on December 21, next year

New Delhi: Director Abhishek Kapoor has indeed announced that Sara Ali Khan's debut movie Kedarnath is slated to release on December 21 next year but that's something which reportedly did not go down too well with producer Prernaa Arora, reports news agency IANS. Kedarnath's release date reportedly clashes with the yet-untitled work-in progress Shah Rukh Khan film (in which he stars as a dwarf) and that's apparently the reason, Prernaa, who co-owns KriArj Entertainment, wanted to reschedule Kedarnath. "Gattu (Abhishek Kapoor) is hell-bent on releasing Kedarnath on the same Friday as Shah Rukh Khan's latest project directed by Aanand Rai, and that's 21 December," a source told IANS. The source maintains that neither Prernaa nor the director is ready to reconsider each other's suggestions.

"Prernaa who is negotiating with Shah Rukh Khan for a forthcoming film finds even the idea of taking on an SRK film at the box-office to be ridiculous," the source added. Saif Ali Khan's daughter Sara co-stars with Sushant Singh Rajput in her maiden Bollywood movie, whose shooting began in September and is currently underway.

Prernaa was reportedly in talks with the 52-year-old superstar to arrive at a middle ground about the two films' release dates when Mr Kapoor reportedly made the abrupt decision to announce Kedarnath's release on Twitter. "To add to her mortification, Gattu went ahead and announced his release date on Twitter at a time when Prernaa was doing her best to convince Shah Rukh that Kedarnath would not clash with Shah Rukh's untitled film directed by Aanand Rai," IANS quoted the source as saying.

Meanwhile, Sara has also reportedly signed up for her second film with KriArj Entertainment, something which Abhishek Kapoor was not exactly in favour of. Sara Ali Khan's Kedarnath releases months after Janhvi Kapoor makes her debut in Dhadak (releasing in July next year).

Promoted
Listen to the latest songs, only on JioSaavn.com
Aanand L Rai directs Shah Rukh Khan in the above mentioned movie, which also stars Katrina Kaif and Anushka Sharma. While a definite release date has not been announced yet, this is what the director told IANS earlier this year: "We are targeting 2018 December. Nothing has been decided yet but we will announce the title very soon."