Kaun Banega Crorepati 12: Nazia Nasim played the first 11 questions without the help of any lifeline and was applauded for that by Amitabh Bachchan 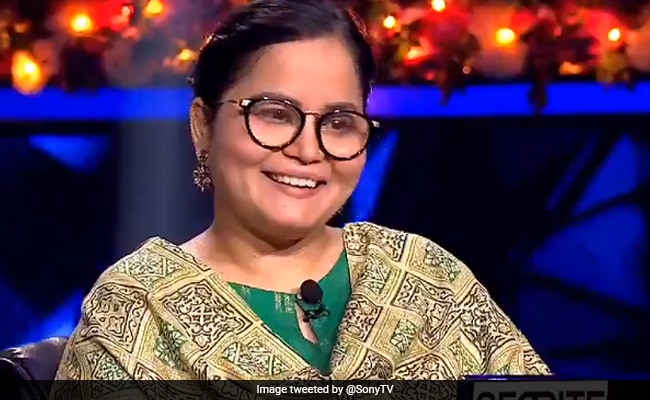 Wednesday's episode of Kaun Banega Crorepati 12 turned out to be a milestone one for this season. Nazia Nasim from Delhi, who described herself as a feminist, won Rs 1 crore on Wednesday's episode and earned a standing ovation from show host Amitabh Bachchan. Nazia Nasim, who is an Indian Institute of Mass Communication pass-out, is a working mother of a nine-year-old son. The episode began with Nazia Nasim continuing the game from last night. She had won Rs 40,000 on Tuesday's episode and took the questions leading up to the 11th one head-on - Nazia Nasim didn't opt for any lifeline till the 11th question. The first time Nazia Nasim took longer than usual to answer a question was when she was asked about Malala Yousafzai's biopic.

Nazia Nasim ran out of lifelines by the time she tackled the Rs 1 crore question but answered it correctly and turned out to be the first crorepati of Kaun Banegra Crorepati 12. Nazia Nasim also opted for the Jackpot question worth Rs 7 crore but eventually quit as she wasn't sure of the answer.

Nazia Nasim not only went home Rs 1 crore in her bank account but also a chocolate hamper, a Diwali gift and a scholarship for her son.

Here are some of the questions asked on Wednesday's episode of Kaun Banega Crorepati:

# Which novel, made into a TV series by Mira Nair in 2020, revolves around the lives of four families?

# The leader heard in this audio clip has never served in which of these ministries?

# The 2020 film Gul Makai is a biopic of which of these personalities?

# Which of the following dynasties did the Kanva dynasty overthrow to come to power around 73 BCE in Magadha?

# The trophy which is awarded to the winners of the women's singles at the Australian Open is named after which legendary tennis star?

# Who became the first Chancellor of the Aligarh Muslim University in 1920?

# Who is the first woman and also former astronaut to reach the deepest point of the ocean, Mariana Trench?

Here's the Rs 1 crore question which Nazia Nasim answered correctly after much deliberation.

# Which of these actresses once won a National Film Award for Best Playback Singer? - the correct answer is Roopa Ganguly.