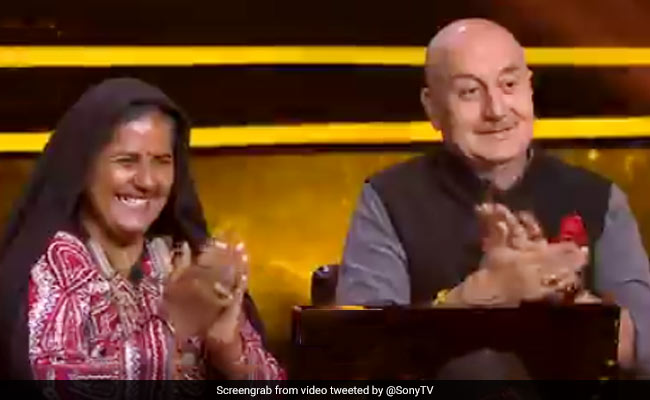 Kaun Banega Crorepati 12: A still from the sets of the show. (Image courtesy: SonyTV)

Like every week, Amitabh Bachchan hosted a Karamveer special episode on Friday with Ravi Katpadi and Pabiben Rabari. Actor-director Anupam Kher joined karamveer Ravi and Pabiben as a special guest on tonight's episode. Ravi Katpadi is a 35-year-old daily wager who works in construction in Udupi, Karnataka. He is known for providing financial help to children suffering from disorders or diseases. He collects money for his philanthropic activities by painting his body as a demon and entertaining people during the celebrations of Krishna Janmashtami for the last 6 years. When Ravi Katpadi revealed that his hometown is just an hour away from Amitabh Bachchan's daughter-in-law, actress Aishwarya Rai Bachchan's, the Gulabo Sitabo actor hilariously said: "Yeh toh parivarik baat ho gyi ab." Big B then greeted the people of Udupi in Tulu.

Next came on the hot seat Pabiben Rabari, whose company produces a line of famous shopping bags called the 'Pabi Bag.' She is from the Bhadroi village of Kutch, Gujarat. She started embroidery work at an early age and invented a new embroidery art form called Hari Jari. She is now a master artisan.

The prize money of Rs 25,00,000 was distributed equally between Ravi Katpadi and Pabiben Rabari.

Meanwhile, here's a sample of the questions you can expect on the hot seat if you are planning to participate in Kaun Banega Crorepati:

#When looking at a standard map, which direction points to the top of the map?

#Subramaniam, Murugan, Skanda and Shanmukhla are all names for which diety?

#Which scientist invested the material that made the N95 mask possible?

#According to Hindu scriptures, who was named for the fact that as an infant she was surrounded and protected by birds?