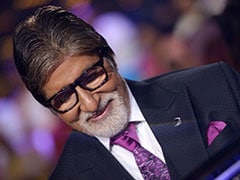 Amitabh Bachchan started Friday night's episode of Kaun Banega Crorepati 11 by talking about Mahatama Gandhi's attempts to tackle racism when he was in South Africa. He soon shifted focus to the game. The first contestant of the evening after winning the Fastest Finger First round was Arun Kumar Mishra, a mathematics teacher from Bhopal. After explaining the rule and format of the game, the quizmaster began the show amid an applause. Amitabh Bachchan bonded with Mr Mishra over the use of fountain pen during their school days. Mr Mishra used his first lifeline - Audience Poll - to answer the fifth question securing Rs 10,000 winning prize. By the seventh question Mr Mishra exhausted all his lifelines. Mr Mishra's game ended after he incorrectly answered the eighth question.

The second contestant of Friday's episode was Dr Urmi Dhatterwal. The second question Dr Urmi answered was based on Mr Bachchan's 1975 film Deewar. She used her second lifeline on the third question and sailed through. Dr Urmi, a jovial personality, entertained Mr Bachchan with her ROFL comments. Her humour was as good as her knowledge. She used her second lifeline at the 10th questioned and resumed the game by securing Rs 3,20,000 prize money. More than once Amitabh Bachchan had to remind Mr Urmi to concentrate on the game instead of letting herself get overwhelmed. She told Mr Bachchan that she had been trying to participate in the show from the first season in 2000.

After a hearty conversation with Amitabh Bachchan, Dr Urmi continue her game. She used her third lifeline on the 11th question. He quit the game after winning Rs 25,00,000.

Kaun Banega Crorepati 11 is a quiz reality show designed to test contestants' knowledge in the genres of politics, general knowledge, arts, sports and entertainment. Here are a few questions asked in tonight's episode.

#1 The politician seen in this video, along with his wife, is a Member Of Parliament from which constituency?

#2 Sendha and Kaala are types of which food?

#3 How many events does a Heptathlon consist of?

#4 Which of these is not issued to a person suffering from acute colour blindness?