"We used to eagerly wait for the stop to arrive and wait for those beautiful ladies to get in," said Amitabh Bachchan 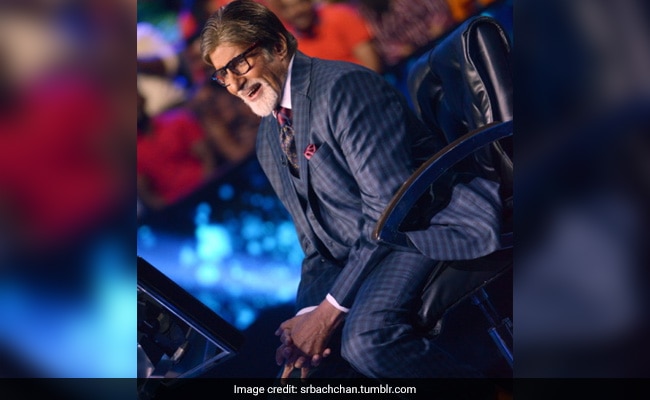 Amitabh Bachchan kick started the Wednesday's episode of Kaun Banega Crorepati 11 with Rohit Kumar from Uttar Pradesh. Mr Kumar is an Indian Air Force personnel. After answering five questions with ease, Rohit started sharing some hilarious stories of his life, which left Big B in splits. He said when he first met his wife alone before their wedding, he brought chocolates for her but his wife, who is in Delhi Police, quickly told Amitabh Bachchan: "Sir, those were the worst chocolates of my life. The taste was so bad." Big B couldn't help but laugh his heart out.

Continuing the chit-chat, Amitabh Bachchan recalled his bus rides in Delhi with "good looking college girls" when he was also a student. He said he used to travel to his college daily by a bus but on his route, especially near Connaught Place, a lot of good looking women students used to board his bus. "From Connaught Place, a lot of good looking college girls from IP College and Miranda House used to take this bus. So we used to eagerly wait for the stop to arrive and wait for those beautiful ladies to get in," he said on the show.

He added that after many years, one of the women of those bus rides met him and shared an interesting tale with him. She told him even she and her friends used to wait for his bus to catch a glimpse of him. She added that she used to wait at the bus stop with her fellow student Pran and the only thought that used to cross her mind that time was - Pran jaaye par Bachchan na jaaye!" LOL.

Rohit Kumar played the game really well and went home with a prize money of Rs 6,40,000. Taking the show forward, Amitabh Bachchan asked the contestants next Fastest Fingers First question. The next contestant to make it to the hot seat was Rakesh Sharma from Delhi. Having retired from the Human Resources Department Ministry as a director, Rakesh has worked as an Officer on Special Duty with late former President of India APJ Abdul Kalam for over 5 years. She also shared her tale of working with the late iconic scientist on the show. Rakesh Sharma will continue the game on Thursday's episode.

Meanwhile, here are some of the questions from Wednesday's episode of Kaun Banega Crorepati 11.

Which of these cities is noted for its 'pan'?

In our national anthem, what word follows next after the words - Punjab, Singh, Gujarat?

According to the Mahabharat, who killed Duriyodhana's son Laxmana in the battle?