Katrina Kaif's Bharat Co-Star Tried To Paint Her. Here's How He Did

We'll save you some time, this wasn't made by Salman Khan 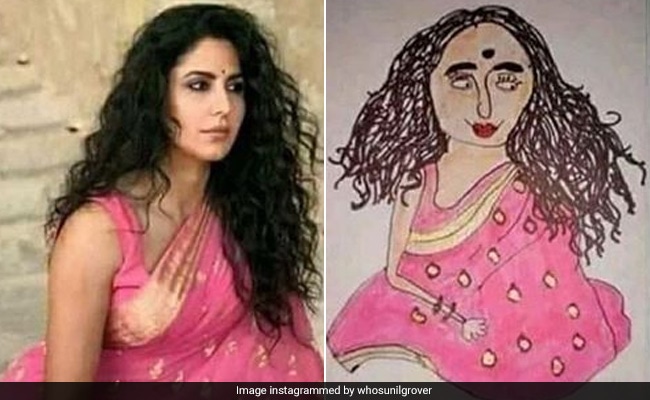 This painting of Katrina Kaif cracked us up. (courtesy Instagram)

Raise your hands if your social media timelines are bombarded with posts that feature home cooks- turned-chefs, poets, and what not. Also, we bet there are a few painters that got some spare time and a chance to showcase their talents. Well, we know one such painter, who displayed his artsy skills by trying to paint one of his co-stars. An actor from Ali Abbas Zafar's 2019 film Bharat found a muse in his co-star Katrina Kaif. In case the name Salman Khan popped into your head, we would like to burst that bubble right away. Unlike Salman Khan, who is supremely talented when it comes to painting and sketching, this actor's depiction was not close enough, but brownie points for trying and bringing smiles to our faces. We are talking about Sunil Grover, who tried to paint his co-star Katrina Kaif. He shared a still of the actress from the film, alongside his piece of art.

Sharing the post on Instagram profile, Sunil Grover wrote: "Lockdown ne kitne poet, chef bana diye. Ek painter ka example yahan hai." As of now, Katrina has not reacted to Suunil's post, but we would love to see his reaction. Check it out:

Sunil Grover's Instagram profile is a sheer delight. Last year, when Katy Perry visited India for her first ever concert in Mumbai, she partied with several Bollywood celebrities. However, Sunil Grover, who wasn't present at the party, did something interesting to make his presence felt. Thanks to Photoshop, the comedian placed himself next to the singer in an edited picture. Sharing the picture on Instagram, Sunil Grover wrote: "Like everyone else I am also with Katy Perry. She is very colourful and humble."

Like everyone else I am also with @katyperry . She is very colourful and humble.