Kartik Aaryan Shares A Pic With Rashmika Mandanna: "I Look Like One Balloon," She Commented 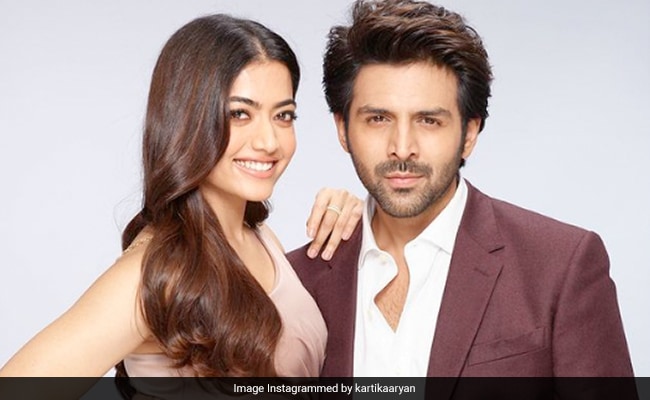 Kartik Aaryan on Thursday shared a picture of himself with Rashmika Mandanna from their photoshoot for a brand. But, what caught our attention was their Instagram exchange. Sharing the picture, Kartik wrote, "Meet My Wow Partner" with a red heart. Commenting on the post, Rashmika wrote, "Hello partner... I look like one balloon but I'll let this one go" with a flower emoji. Replying to Rashmika's comment, Kartik wrote, "Isliye pakda hai na maine... chod deta toh udd jati" with laughing emojis.

Kartik's post garnered about 1.5 million likes and caught the attention of filmmaker-choreographer Farah Khan, whose comment read, "Wow! Bada handsome lag raha hain" with a heart emoji. Many of Kartik and Rashmika's fans too commented on the identical post. One of them wrote, "Aashiqui 3", while the other wrote, "You are hero no.1." Many others dropped fire and heart emojis in the post's comment section.

The actor will also be seen in Rohit Dhawan's Shehzada, which is the official Hindi remake of the 2020 Telugu film Ala Vaikunthapurramuloo, starring Allu Arjun in the lead role.

Currently, Kartik is shooting for his upcoming film Satyaprem Ki Katha with Kiara Advani. Just a few days ago, Kartik announced another film Ashiqui 3, which will be directed by Mohit Suri.