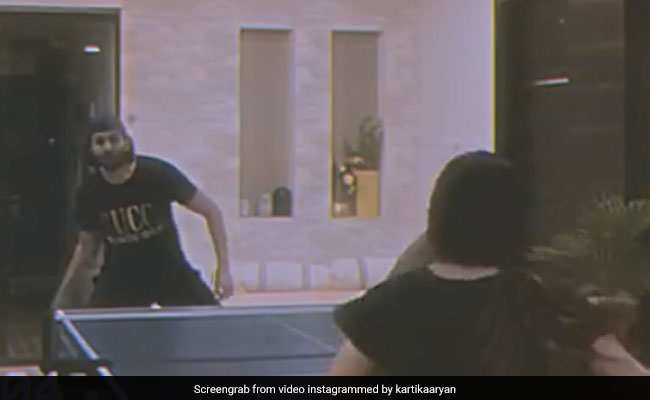 Kartik Aryan and Kritika in a still from the video he shared. (Image courtesy: kartikaaryan)

Kartik Aaryan and his sister Kritika occupied a spot on the list of trends on Thursday, courtesy their recent table tennis match. The actor, on Wednesday, shared a video of himself playing a table tennis match with Kritika inside what appears to be their home. Guess who won? Kritika, but according to Kartik Aaryan, he let her win - because "sacrifice." Sharing a video of their match, the actor wrote: "Kittu (Kritika) ki khushi mere liye anmol hai...Isliye maine usse 'Jeetne Diya.' #Sacrifice." Kartik's ROFL reason cracked up the Internet. Just like producer Sajid Nadiadwala's wife Warda, several of Kartik's fans also called his sister a "champ" in the comments section.

Kartik Aaryan's sister Kritika often features on his Instagram feed. Remember the hilarious fake string challenge clip? In the video, Kritika mimics pulling a fake string through Kartik's ears when she distracts him and then slaps him across the face. "Subah utho, nahao, pito, so jao. #QuarantineLife," the actor summed up his "quarantine life" in his ROFL caption.

In terms of work, Kartik Aaryan has featured in several films till now, including Akaash Vani, Pyaar Ka Punchnama 2, Luka Chuppi, Guest Iin London, Sonu Ke Titu Ki Sweety and Pati Patni Aur Woh. He has a couple of films lined up such as Bhool Bhulaiyaa 2 and Dostana 2.