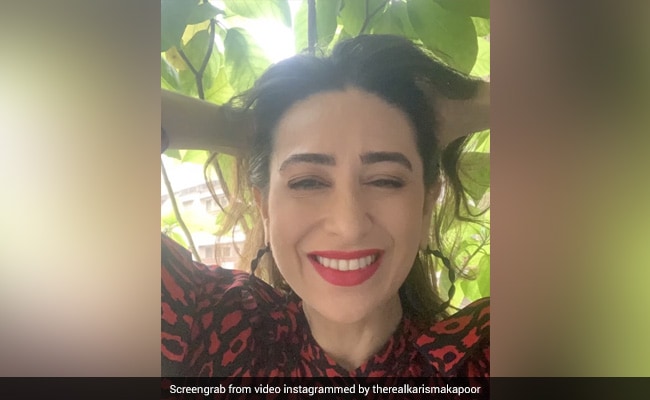 Karisma Kapoor's candid social media posts are too good to ignore. Time and again, the actress has shared her fun moments with her Instafam. But have you ever wondered what Karisma's Sunday looks like? Well, the actress shared a clip on Instagram, where she's seen all dressed up, wearing a red shirt. But what blew our minds was her bold red lips. Karisma described her mood with the caption, “Summer on my mind”, and attached emojis of the Sun and red lips. Actor Saif Ali Khan's sister and jewellery designer Saba Pataudi stole was among those who commented on Karisma's post. Saba wrote, “Beautiful”.

For Karisma Kapoor, Sundays may be all about glam and dreamy moods, but Mondays seem to be reserved for fitness. Here's a Monday post by the actress where she flattered her chiselled body in a black athleisure. She captioned the selfie, “Monday hustle”, and added a muscular arm emoji.

Sundays also set the mood for “no filter mornings” for Karisma Kapoor. Hence, this post. Here she candidly poses under the sun with her messy hair.

Apart from Karisma Kapoor's selfies, we are also big fans of her fam-jam photos. Recently, she was present at a get-together of the Kapoor family. The gathering included Neetu Kapoor, Kareena Kapoor, Aadar Jain, Riddhima Kapoor-Sahni and Reema Kapoor, among others. Also seen in the photo was actress Tara Sutaria, who is dating Aadar Jain. Karisma captioned the post, “La Familia”, with a heart emoji.

We also loved the time when Karisma Kapoor posed with her nephew, Jeh, who is Kareena Kapoor's younger son. Jeh recently turned one, and on his birthday, aunt Karisma posted a note, “Happy 1st birthday to J baba. Love you mostest our bundle of joy.” In the photo, Karisma is seen holding Jeh on her lap.

Karisma Kapoor was last seen in the web series, Mentalhood.