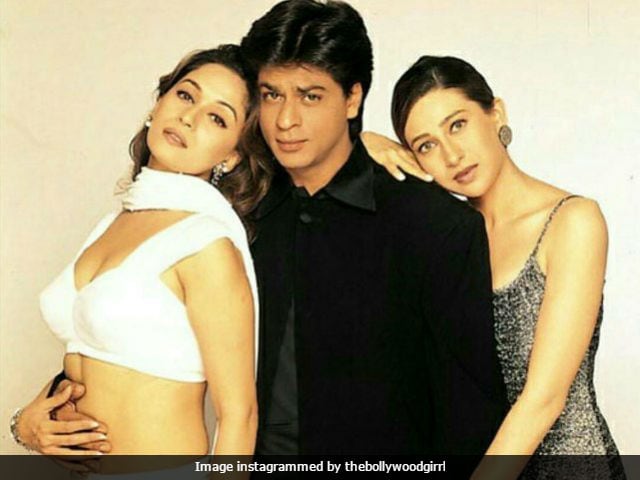 New Delhi: Actress Karisma Kapoor shared a nostalgic picture from her 1997 movie Dil To Pagal Hai on Instagram. In the black and white throwback picture, the 42-year-old actress can be seen at the sets of Dil To Pagal Hai shooting the dance sequence of The Dance of Envy. Calling her film 'ahead of its time', Karisma Kapoor captioned the image as: "Being fit was in then too#diltopaagalhai#aheadofitstime#wonderfulmemories#girlpower#danceofenvy#throwbackthursday#repost @yrf(sic)."Dil To Pagal Hai also featured Shah Rukh Khan and Madhuri Dixit in lead roles. The film, directed by Yash Chopra, was a major commercial success. It earned three National Awards and eight Filmfare Awards.

See the picture shared by Karisma Kapoor below:

On Valentine's Day 14 too, Karisma Kapoor shared a throwback picture with her Dil To Pagal Hai co-stars. The image had the trio holding the Filmfare Award over their heads."#valentinesday reminds me of #dtph #repost#throwback#fondmemories#filmfareawards @yrf @madhuridixitnene @iamsrk @filmfare," wrote Karisma.

See the picture below:

Promoted
Listen to the latest songs, only on JioSaavn.com
Karisma Kapoor, who made her acting debut at the age of 17 with 1991 movie Prem Qaidi, is best known for her performances in films such as - Raja Hindustani, Judwaa, Andaz Apna Apna, Biwi No.1, Hum Saath-Saath Hain, Fiza and Zubeidaa. She was last seen in 2012 film Dangerous Ishhq, directed by Vikram Bhatt.

Karisma Kapoor will be making a cameo appearance in Judwaa 2 starring Varun Dhawan, Taapsee Pannu and Jacqueline Fernandez. The film, directed by David Dhawan, is scheduled to release in theatres on September 29.