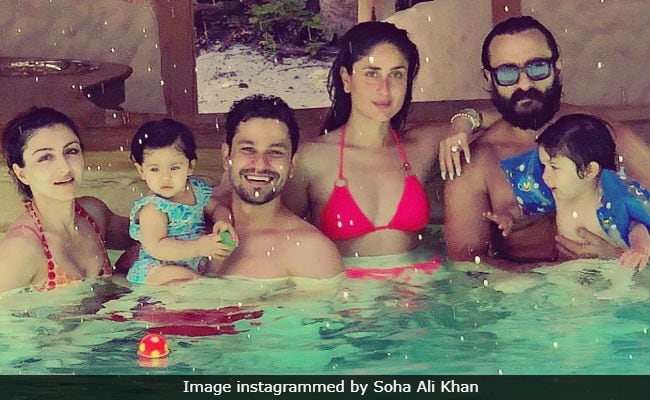 Kareena Kapoor, Saif Ali Khan their son Taimur are having a Khan-tastic time in Maldives along with Soha Ali Khan, Kunal Kemmu and their daughter Inaaya Naumi. Soha shared pictures of the group having a gala time at a barefoot luxury resort. "Make a splash," she captioned it. In the photo, Kareena, Saif, Soha and Kunal can be seen soaking up the sun in a pool with Inaaya and Taimur also joining them. In addition Soha also shard a picture of Taimur and Inaaya's play date assisted by Kareena and Kunal. "Colour me happy!! #playdate," she captioned the picture.

Here are Saif, Kareena, Soha, Kunal, Taimur and Inaaya with holiday mode on:

Here's a 'wall of fame' featuring Saif and Kareena:

Earlier, a picture of Kareena smiling for the camera, Saif with his headphones on and (a slightly out of focus) Taimur by the sea was shared by several fan clubs. Kareena and Taimur are twinning in white while Saif went the off-white route. Kareena sported a no make-up look and accessorised with a Chanel cuff bracelet. In another picture shared by fan clubs, Kareena, Saif and Tamiur (handled by his nanny) can be seen arriving at their holiday destination. Saif cracked us up with his funny expression.

It appears that Saif Ali Khan and Kareena Kapoor took time out for a vacation before they get busy with their respective work commitments. Saif Ali Khan will soon start filming the second season of Sacred Games after the phenomenal success of the first season. He also has Gauravv K Chawla's Baazaar up his sleeve. Baazaar, co-starring Chitrangada Singh, Radhika Apte and Rohan Mehra, is slated for 2018 release.

Kareena Kapoor has signed up for Karan Johar's Takht, which will start as per the availability of her co-stars Ranveer Singh, Alia Bhatt, Vicky Kaushal, Janhvi Kapoor and Bhumi Pednekar. Kareena Kapoor was last seen in Veere Di Wedding, which released in June this year. Kareena made it clear during the promotions that she would make one film in a year to spend maximum time with her son Taimur.

In addition to films, Kareena Kapoor's work diary is booked for endorsement shoots.