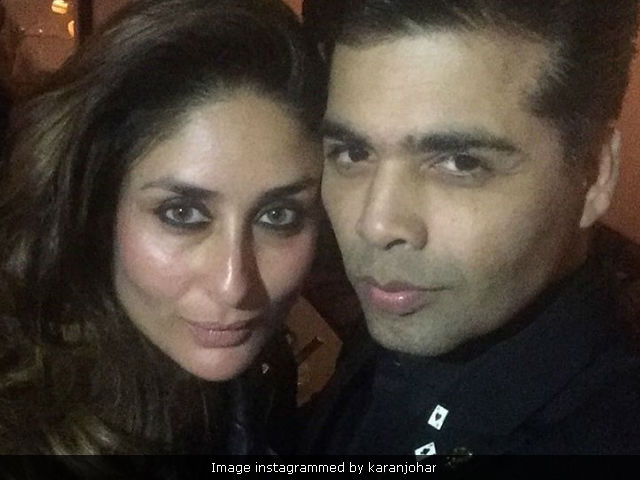 New Delhi: Actress Kareena Kapoor is still on maternity leave but she's apparently already been approached for a second film after Veere Di Wedding, which she's meant to begin filming when she resumes work. Times Of India reports that Kareena's friend and colleague Karan Johar wants to sign her for a romantic comedy, quoting a source as saying, "Karan has approached her for one of his home productions. It's a romcom and two friends are talking the project over." Kareena, 36, and husband Saif Ali Khan became parents to a baby boy they named Taimur on December 20. Kareena has made some official appearances since then - walking the ramp at Lakme Fashion Week and as ambassador for the channel BBC Earth - but she hasn't returned to film sets yet.

The rumoured film would reunite Kareena Kapoor and Karan Johar in a professional partnership four-odd years after their last film - 2013 flop Gori Tere Pyaar Mein which Karan produced and Kareena starred in with Imran Khan. Karan Johar also produced her 2010 film We Are Family - the only movie he has directed Kareena in is 2001's Kabhi Khushi Kabhie Gham. Soon after, they fell out over Kareena's asking price for the film Kal Ho Naa Ho, which Karan Johar produced. The actress was offered the role Preity Zinta was eventually cast in but asked "for too much money", Karan revealed in his autobiography last year. Kareena wanted to be paid as much as Shah Rukh Khan, who was the lead actor, and it led to a rift that the filmmaker now describes as 'idiotic.' "Kareena and I didn't speak to each other for almost a year. For a year, we looked through each other at parties. It was very idiotic. She was a kid; she's a decade younger than me," he revealed in his autobiography An Unsuitable Boy.

Promoted
Listen to the latest songs, only on JioSaavn.com
The friendship was eventually mended and last year, Karan Johar announced the birth of Taimur Ali Khan on his Twitter account.

Kareena Kapoor's last film outings were in 2016's Ki And Ka and the acclaimed drug drama Udta Punjab. She is to star in Veere Di Wedding with Sonam Kapoor and Swara Bhaskar next - the film has already been delayed and may also have to change its title.