Karanvir Bohra and Teejay Sidhu have been married for 14 years 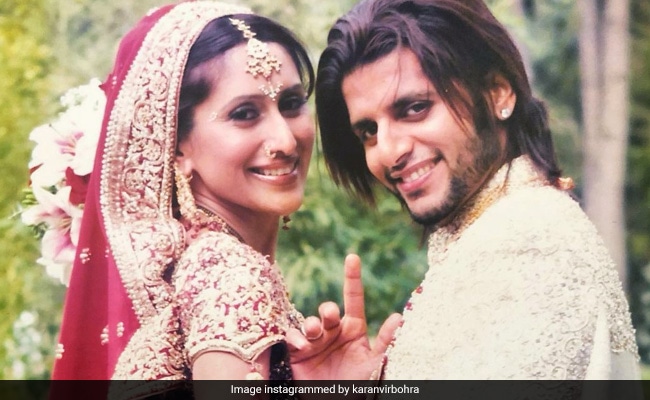 Karanvir Bohra wished his wife on their 14th anniversary in the sweetest way possible on social media. The duo currently live in Vancouver, Canada. On Thursday, the actor posted then vs now pictures of himself and Teejay Sidhu. Karanvir Bohra married Teejay Sidhu in 2006. The couple are parents to twin daughters - Raya Bella and Vienna - and a baby girl named Gia, who was born in December last year. The first photograph in Karanvir Bohra's post is a throwback of the actor and his wife from their wedding festivities. It shows them holding hands and posing for the camera with million-dollar smiles on their faces. The second picture is a recent photo of the couple recreating the exact pose.

"How it was vs how it's going. 14 years.... happy Canadian anniversary darling," wrote the actor for Teejay Sidhu in his post.

Karanvir has been sharing a set of posts and videos to wish Teejay on their 14th anniversary. On Wednesday, he posted this:

"Tu jab jab mujhko pukare... Crossed the double 7 itch year sweety.... Happy 14th Canadian anniversary darling,' he wrote on Tuesday and added: "It really feels like I'm still dating you, the love, the tiffs, the cuddles the... (ahem!) Sab om namoshivaya. Aur upar se 3 deviyon ka papa because of you....I love you so much my darling."

In terms of work, Karanvir Bohra is known for his performances in TV shows like Dil Se Di Dua... Saubhagyavati Bhava? Just Mohabbat, Kasautii Zindagii Kay, Shararat, Qubool Hai and Naagin. He has also starred in a couple of films such as Kismat Konnection, Love Yoou Soniye and Hume Tumse Pyaar Kitna.