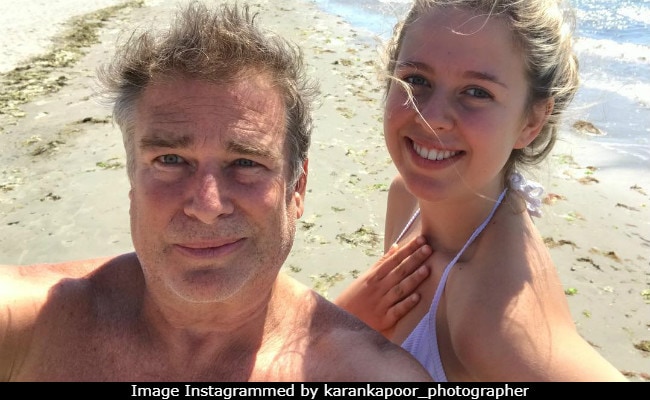 Remember Karan Kapoor, son of legendary actor Shashi Kapoor? On Tuesday, we got a glimpse of his family vacation on his Instagram, which is mostly restricted to posts about works of photography. Karan Kapoor is a critically acclaimed photographer and is married to Lorna Kapoor - the couple are parents to a daughter named Aliya and son Zak. Karan Kapoor recently shared a selfie with his daughter Aliya from the West Wittering Beach in England and wrote: "Great day with Aliya, Zak and family. What a summer!" The photo Instagrammed by Karan Kapoor is a rare one considering there are very few glimpses of his immediate family on his social media accounts.

Karan Kapoor was also spotted at Kareena Kapoor's birthday party in Mumbai in 2016. It's always been such a delight to spot him at Kapoor fam-jams.

Karan Kapoor started his career with modelling and followed it up with films. In the Eighties, he was particularly famous for the Bombay Dyeing advertisements he appeared in and was an absolute heartthrob. His acting debut in a full-fledged role was with Juhi Chawla in 1986's Sultanat. In 1978, Karan Kapoor featured with his parents and his siblings in Shyam Benegal's critically acclaimed film Junoon. He also had a brief role in Shashi Kapoor-produced 36 Chowringhee Lane (1981). Karan Kapoor's resume also includes the British TV show The Jewel In The Crown, which aired in 1984. Karan Kapoor also featured in Loha but never made it big as an actor and moved to London where he became a photographer.