Karan Johar shared an old picture and said: "Spot the kids at this superman bash. Many decades ago" 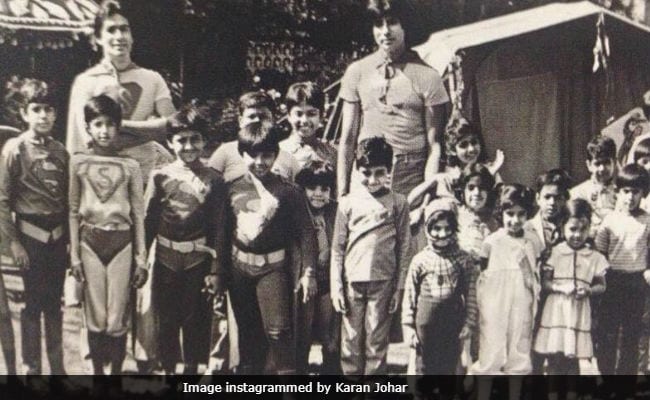 New Delhi: Karan Johar shared a mega-throwback picture on Instagram to keep you guessing all weekend long. Saturday surprise by KJo included a few decades old picture featuring Amitabh Bachchan with a group of kids all dressed in superhero costumes - mostly Superman and Spider-Man. He captioned it: "Spot the kids at this superman bash. Many decades ago." Instagram users are baffled and are guessing left right and centre. We are sure that the picture at least has Karan, Abhishek Bachchan and his cousin Naina (who identified herself as Spider-Man in comments section). Some Instagram users also guessed that the picture includes Aditya and Uday Chopra, who are Karan's cousins.

Spot the kids at this superman bash!!! Many decades ago.. @amitabhbachchan @bachchan

Can you guess who's who?

Filmmaker Karan Johar's Instagram page for the last few days is nothing short of a blast from past. His second film as director, Kabhi Khushi Khabhie Gham, completed 16 years a few days back and he dug up some old pictures from the film's sets. The pictures show Karan's 'obsession' with the character of Poo (played by Kareena Kapoor) and the his need to pay attention to detail.

Karan Johar is currently producing Sridevi's daughter Janhvi Kapoor's debut film Dhadak. She co-stars in it with Shahid Kapoor's brother Ishaan Khatter. The film will is being helmed by Shahshak Khaitan. He is also producing the ambitious trilogy Brahmastra, which features Amitabh Bachchan, Ranbir Kapoor and Alia Bhatt in lead roles. Brahmastra is directed by Ayan Mukherji.