Karan Johar said: "Our heart is big, our house is open to all. We will happily, lovingly and respectfully welcome her on the show" 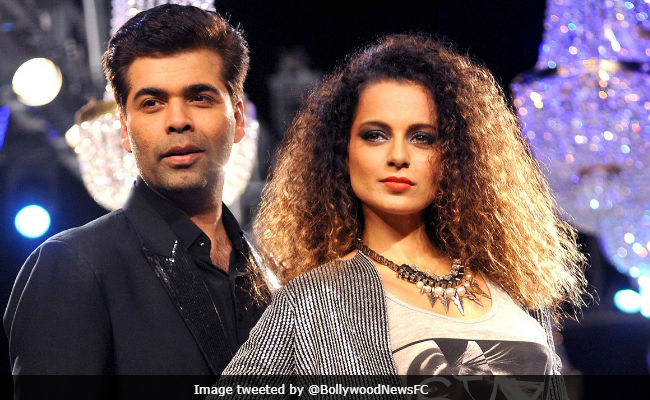 New Delhi: The last time Karan Johar invited Kangana Ranaut on his show, it did not end very well for the filmmaker. He was tagged as the 'flagbearer of nepotism' on his talk show Koffee With Karan, which opened the barrage of the debate on nepotism last year. But Karan Johar says that he is A-Okay to welcome actress Kangana Ranaut on his upcoming reality television show India Next Superstar, reports news agency PTI. The filmmaker said: "I am sure when Star Plus (the channel which will air the show) invites her we will be happy to have her. Our heart is big, our house is open to all. We will happily, lovingly and respectfully welcome her on the show."

The first celebrity on the show is Priyanka Chopra, who says in the promos that the show will give many artistes to show their talent and the right platform. Like Priyanka, Kangana is also a self-made star and has been very vocal about the Bollywood politics of nepotism.

When Karan Johar first tweeted about the show, the tagline of which is "Na Khaandaan Na Sifaarish," the Internet accused him for "looking for an image makeover?" Just before announcing his participation in the talent hunt show, Karan had announced the title of Sridevi's daughter Janhvi Kapoor's debut film. Speaking to PTI, Karan Johar said: "I don't think this tagline was an answer from my side to anything. Lot of people want to be part of the entertainment industry but it is difficult to find a platform. We are providing this platform to all those who are talented."

Why doing this drama. Thousands of strugglers must be visiting you daily. You never gave them any chance but just launched star kids.looking for an image makeover?