"Why every time she is on a public platform one asks her about her personal life?" asked Hansal Mehta 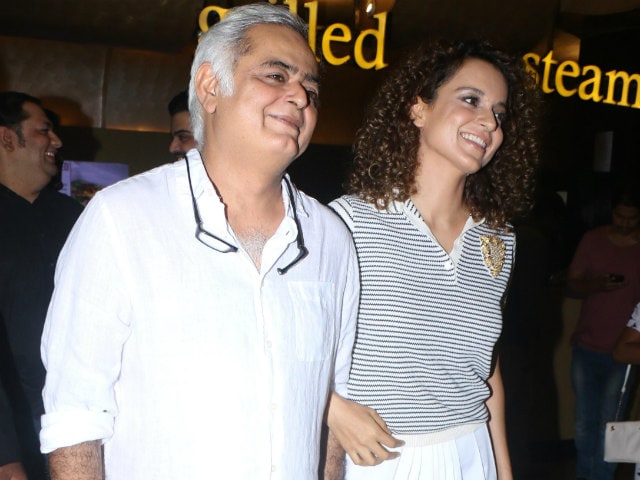 New Delhi: Not her new film Simran but Kangana Ranaut and her tiff with two celebrities (read Hrithik Roshan and Karan Johar) with whom she has bitter relationships, is keeping the Internet interested very, very interested. Ahead of Simran, Kangana's explosive remarks during several interviews has also subjected her to criticism from certain quarters of the Internet, who think she's taking the shortcut to publicity. Kangana's Simran director Hansal Mehta, who has also previously jumped to her defence, dismissed Kangana's recent appearances as publicity stunts, saying: "Why every time she is on a public platform one asks her about her personal life? She is not somebody who will back out from speaking about anything that is asked to her. She bares her soul. (I) don't see it as publicity," reported news agency PTI.

Mr Mehta's movie Simran has clearly been side-lined amidst all the interest in Kangana Ranaut's personal life but the director says his film "will speak for itself." Kangana deserves due respect for being "fiercely independent", Mr Mehta added: "She is an individual who needs to be respected for being fiercely independent in the choices that she makes. I am not sad (for the film). The film is special and it will remain that way."

Earlier in June, the filmmaker discarded rumours that the editor of his film has been sacked and Kangana has taken up the vacant post. "It angers me that every time some malicious gossip has to be spread people meaninglessly drag Kangana into their stupid machinations. She is a valued friend, actor and collaborator. Period," IANS quoted Mr Mehta as saying. Hansal Mehta had also joined camp Kangana Ranaut during her credit row with the film's writer Apurva Asrani.

The Kangana Ranaut vs Hrithik Roshan column resurfaced in reports after the actress spoke at length on India TV and News 18 about her alleged affair with Hrithik, which he denies. Singer Sona Mohapatra and filmmaker Farah Khan are the celebrities to have recently accused Kangana of exploiting in the name of feminism. Farah's comment that Kangana is "playing the woman's card" resonates what Karan Johar accused Kangana of previously. Kangana had tagged Karan as "the flagbearer of nepotism in Bollywood" on his talk show Koffee With Karan.

Publicity stunt or not, Kangana Ranaut suggestively features in a new song titled The Bollywood Diva, in which she appears to brutally dissect Bollywood patriarchy while taking direct hits at Karan Johar and Hrithik Roshan. Kangana's video is in collaboration with comedy collective All India Bakchod or AIB and has gone crazy viral.

Promoted
Listen to the latest songs, only on JioSaavn.com
Kangana Ranaut plays a divorcee in Hansal Mehta's thriller Simran, which is releasing this Friday. Kangana also has Manikarnika: The Queen of Jhansi in the pipeline.