Kangana Ranaut Vs Karan Johar On Nepotism: What Other Stars Say 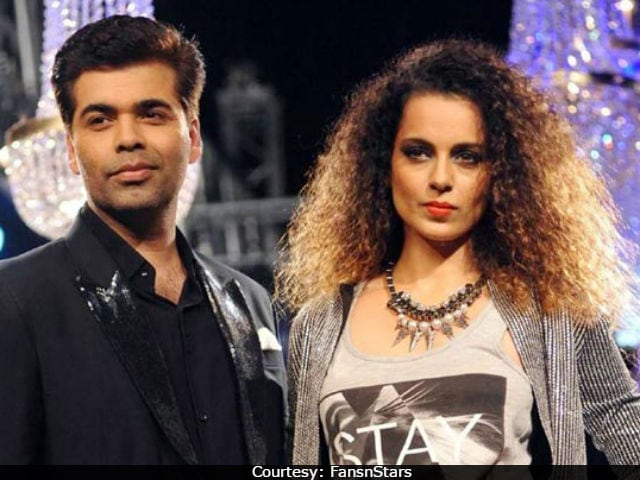 New Delhi: The only Bollywood celebrity who thinks that the Hindi film industry, ruled as it is by cinematic dynasties now sprawled over several generations, is nepotistic seems to be actress Kangana Ranaut. The 29-year-old star told filmmaker Karan Johar (son of producer Yash Johar) on his show Koffee With Karan: "In my biopic, if ever it's made, you'll play that stereotypical Bollywood biggie, who is like you know, very snooty and completely intolerant towards outsiders, flag-bearer of nepotism, the movie mafia." She seems to be an isolated voice, with other stars rushing to disclaim any experience of nepotistic behaviour in filmy circles.

While they may not quite be "done with Kangana playing the woman and victim card," as Mr Johar said in London days after the Koffee episode aired, every single actor quizzed about nepotism has excused it in some manner. Aamir Khan, whose father, uncle, brother, cousin and nephew have all worked in Bollywood with varying degrees of success, told news agency PTI: "In general, I think it's a normal human tendency to try and help people who you love and care for. It doesn't have to be someone who is part of your family, it could be someone you care for. It's a very natural emotion."

Sonam Kapoor, daughter of Anil Kapoor, said on NDTV's Spotlight: "Every morning I wake up and it's great bathroom reading. It's mudslinging of the worst kind. I don't know Kangana but I know Karan very well. I think I find Kangana very entertaining and that's about it. Well, I don't want to comment on something that looks opportunistic, honestly. And I believe you are a feminist when you build other people up, especially other women." Sonam has been produced by her filmmaker sister Rhea Kapoor in films like Aisha and Khoobsurat. Her family includes producer Boney Kapoor and actors Sridevi, Arjun Kapoor and Mohit Marwah. Her brother Harshvardhan debuted in Mirzya last year.

Anushka Sharma, who made her Bollywood debut in Aditya Chopra's 2008 film Rab Ne Bana Di Jodi opposite Shah Rukh Khan, told IANS: "First of all, every actor has her own journey in Bollywood. Moreover, if you are good at your work, people will show interest to collaborate with you, irrespective of your background. I have huge respect for Aditya Chopra who launched me. Ranveer Singh, Parineeti Chopra and all of us were not from the film industry. So being an outsider, I never faced nepotism."

Badrinath Ki Dulhania actress Alia Bhatt thinks there's too much being made of the subject. "We are talking too much about it. We need to stop," she told IANS. Alia is the daughter of producer Mahesh Bhatt and actress Soni Razdan. Her sister Pooja Bhatt, uncle Mukesh Bhatt and cousin Emraan Hashmi are all members of the film fraternity. Alia's Badrinath Ki Dulhania co-star Varun Dhawan had a sharp comment to make on the nepotism debate. "If my father won't do this for me then who will?" he told NDTV. Varun has already starred in his father David Dhawan's Main Tera Hero and will soon be seen in Judwaa 2, also helmed by the veteran filmmaker.

Actress Swara Bhaskar pointed out that how nepotism is an inevitable part of Bollywood and told PTI: "Bollywood as an industry is based on relationships, it has always been star-driven and it has an element of feudalism. So, it would be difficult for an outsider but my experience of Bollywood is not nepotistic at all."

Promoted
Listen to the latest songs, only on JioSaavn.com
However, Swara, Kangana's co-star of the Tanu Weds Manu set of films, also added: "I think people, who have been most warm and nice are people like Karan Johar, Sonam Kapoor and even Aditya Chopra. He has always been very responsive and helpful. Since the whole nepotism debate is going on, I just want to say that Karan has been a revelation to me. He is an industry elite but he has been a wonderful surprise. He launched our film's poster despite me not knowing him personally."

We're waiting to hear from someone, anyone, who agrees with Kangana Ranaut. Chances are, it will be a long wait.