Kangana Ranaut believes that people can be global citizens without compromising on their individuality. 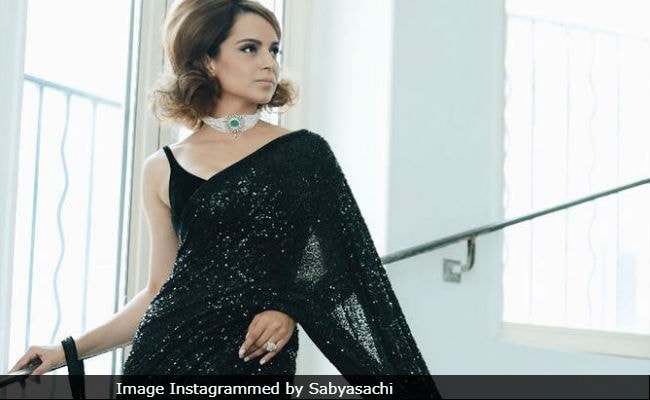 New Delhi: Kangana Ranaut, who is considered to be one of the most fashionable actresses in Bollywood, believes that Indian women should know how to wear a saree. The National Award-winning actress, in a statement said: "I think if you're an Indian woman, you should know how to drape a saree. It's a racket out there with people who only want to shame others in the name of propagating their culture and identity," reports news agency IANS. The 31-year-old actress, who has been trolled for her accent on several occasions said: "But I know people who find it uncool to admit that they speak and understand Hindi or that they like Indian food or (that they are) brown. You can be a citizen of the world without compromising on your individuality."

The Queen actress, who made her debut at the Cannes Film Festival this year, opted for a glamorous black embellished saree by Sabyasachi Mukherjee. Take a look at Kangana Ranaut's first day at the French Riviera.

A post shared by Sabyasachi Mukherjee (@sabyasachiofficial) on May 9, 2018 at 9:50am PDT

It is not just Kangana but also ace designer Sabyasachi Mukherjee who said something similar about sarees earlier this year. However, Sabyasachi was trolled for trolled for his statement, which read, "If you tell me you do not know how to wear a saree, I would say shame on you," It's a part of your culture; you need to stand up for it." After a severe backlash, he posted an open letter on his Instagram page in which he apologised for using the word 'shame' in reference to "some women's inability to wear a saree."

Back to Kangana Ranaut - the actress is often seen adorning the nine-yard-garment. Take a look at some of Kangana's saree looks here.

Promoted
Listen to the latest songs, only on JioSaavn.com
On the work front, Kangana is currently filming for a period drama named Manikarnika-The Queen Of Jhansi, which is the story of Rani Laxmi Bai and features Sonu Sood, Atul Kulkarni and Ankita Lokhande. Kangana will also be seen in Mental Hai Kya, opposite Rajkummar Rao. The actress was last seen in the 2017 film Simran.